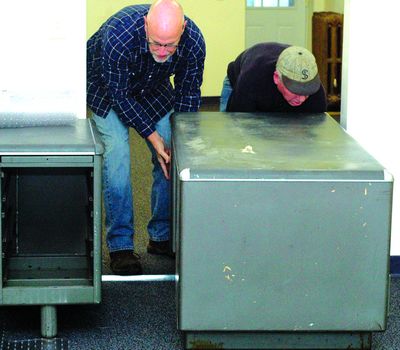 It was a long time coming-longer than anyone expected-but Friday, the Times-Journal began moving back into its old digs.
Quick work by the Cobleskill Fire Department put out a fire that started in one of the apartments above the T-J last December 23.
But smoke and water damage to the space used by the Sales, Printing, and Graphics Departments left half of the Division Street building unusable.
"We were able to move desks and computers around to maximize the space we could use, but it's been cramped and it took us a while to reorganize," said T-J Publisher Jim Poole.
"Having everyone pitch in here and make the best of things helped a lot. But it's certainly nice to be getting back to our regular work space."
The space in the water-damaged rooms has been rehabbed to keep up with the times.
Since the T-J is now composed on computers, the old slant-topped paste-up tables were no longer needed and that room has been turned into a library and meeting space.
The Sales Department is also back in one place-sales people had been working throughout the building-on the Division Street side of the building.
"The redesigned space is going to make us a lot more efficient," said Sales Manager Bruce Tryon. "It looks wonderful and it's a lot more comfortable."
Work on the rehabbed space included new flooring and carpeting, sheet rocking and painting, a new ceiling and lighting and telephone and computer line upgrades.
"Angela Kogler of Upstate IT has been our computer consultant through all of this," said Mr. Poole, "offering advice and helping us understand what needed to be done as far as our computer network goes. We couldn't have done it without her.
"We can't afford to be without out computers a day in this business and Angela has made sure it didn't happen."
Friday, T-J staffers and family began moving walls of desks and other equipment into the new space; Saturday, movers hauled in even more from off-site.
In the process, they also filled a couple of dumpsters from stuff that had somehow escaped the original purge.
"Like a computer monitor with a note on it, 'Doesn't work,'" said Mr. Poole laughing. "And a phone marked 'May have problems.'"
Also: A couple of questionable vacuum cleaners, office chairs with no backs, boxes of outdated paperwork and a filing cabinet with no drawers.
Something that won't be hitting the dumpsters is the old Times-Journal sign that's been in storage since it was replaced a couple of years ago and hidden behind "stuff" since the fire.
John Pangman stopped by Saturday to add it to his collection of old local signs.
"It got a good home," said Mr. Poole.
Though it will still be a while before things are completely back to normal at the T-J, senior employee Jerry Mickle summed it up for everyone when he walked in Monday.
"Wow," Mr. Mickle said. "It looks like a whole new shop."