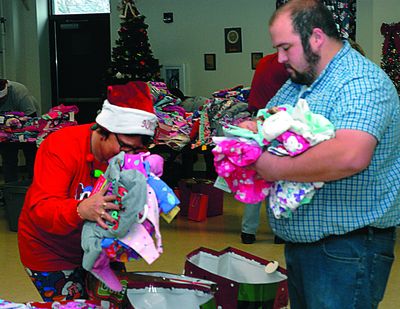 Generous Schoharie County donors take care of needy children with gifts at the holidays and food year 'round.
Keeping kids warn is a priority, too.
That's what the Toasty Toes Pajama Project, now in its fourth year, is all about.
Toasty Toes will donate 1,400 pairs of PJs to Schoharie County children at Christmastime.
The idea for Toasty Toes came to Trista Bradt when she was delivering Thanksgiving dinner to a family she and her co-workers had adopted.
A little girl came to the door, and she was poorly dressed for the cold weather.
"I call this a 'God wink,' that Trista was specifically meant to be there, at that time, in that place, and inspiration struck," said Sharon Aitchison, Ms. Bradt's aunt.
Concerned that many kids would be going to bed cold, Ms. Bradt enlisted her mother, Beth Aernecke Volkert, to help. Ms. Bradt's college roommates and family friends pitched in, and together they donated 125 pairs of pajamas for needy children.
That was in 2013.
The effort and numbers grew in 2014 and 2015, when 800 pairs went to kids. The goal was 1,000 this year, but donors topped that target easily.
Helping out this year were CRTA and CRESPA, Cobleskill-Richmondville unions for teachers and support personnel, respectively. They gave 75 pair to Ms. Aitchison on Thursday.
"We saw it as a good community outreach project," said Dawn Townsend, president of the teachers' union.
"Kids in the county need this, and the Ryder School theme is caring. The two unions worked together."
The unions and many others also donated money that pays for wrapping the pajamas.
Nancy Brumaghim, also involved in Toasty Toes, works with local agencies such as Head Start and the Schoharie County Community Action Program to get the PJs to the right kids.
Toasty Toes has grown rapidly in just four holiday seasons. Donations come not just from the county, but also New York City, Connecticut, Maine, New Orleans, Florida, California, even Germany.
But most donations are local.
"There's a need," Ms. Bradt said. "People think of a kid being cold, and there's a need to help."
Ms. Aitchison agreed.
"It's a big appeal for children," she said. "It's something to donate that stays within Schoharie County.
"It's an inexpensive way to help. For four or five dollars, you can make a difference in a little child's life."
This year, Toasty Toes will also donate fuzzy slipper socks and a packet to make hot cocoa to children.
"We are deeply appreciative of and thankful for every single donation," Ms. Aitchison said.
"We don't even know the names of everyone who participates, but know that you are appreciated."
Abo9ut 20 volunteers turned out Sunday to wrap the PJs at the Cobleskill Firehouse.
Ms. Bradt said Toasty Toes will have its 501c3 designation by the 2017 season.
Also, she said, there have been requests from Fulton and Albany counties to establish Toasty Toes efforts there.
"I'm not sure how that will happen because we're so small," Ms. Bradt said.
"But we will grow as we need to grow."
Donations made now will be saved for next year. Anyone interested can call Ms. Aitchison at 234-7861; Ms. Bradt at 231-1473; or Ms. Volkert at 231-1841.