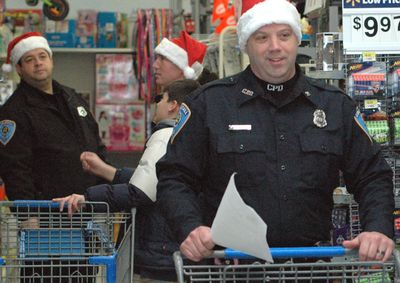 Here's the thing about Christmas shopping:
Even when you're a cop, used to fighting crime, there's probably nothing tougher than taking a kid with a credit card and a list up and down the aisles of Wal-Mart.
Also:
Nothing more likely to bring tears-of both the Christmas spirit and the glad-it's-not-me type-from others doing their last-minute shopping.
"God bless you, officer. Thank you for your service," said one woman Thursday, offering a high-five to one of a dozen Cobleskill Police Department officers pushing a cart through the Wal-Mart toy aisle Thursday, young charge in tow, for the CPD's second Shop with a Cop.
"I hate Christmas shopping," she confided, conspiratorially, after the two had passed.
Shop with a Cop is modeled after a national program that matches kids from families looking at a skimpy Christmas with officers and a $150 shopping spree at Wal-Mart.
This year, 11 kids from Cobnleskill-Richmondville Golding and Ryder Schools participated; local donations raised money for the two-hour adventure, which wrapped up with lunch at Pizza Shack, also donated.
All of the kids shopped for their families-not just themselves-and all brought a hand-written list from home.
Still, the task was at times daunting and challenging.
"Where are the baby toys?" whispered one cop.
"No clue."
"Who's Miss Incredible?" asked another.
"Maybe try the action figures? Or the Barbies?"
Nope, Miss Incredible, it turns out, is a computer game avatar. She lives in electronics.
Another youngster wanted nail polish for his sister and maybe his mom. Or maybe makeup instead.
"Help me," mouthed a cop silently.
When the cops and kids first arrived at Wal-Mart, no one seemed to notice.
Then, they drew attention, smiles, and Christmas wishes.
Then, they were every other shopper:
Exhausted and done.
"If you break that saber? We can't go back and get another," one officer gently told his charge, who was swinging at a classmate.
In the end, it took a mom-guidance counselor to suggest, then insist, that the two accompany her on a walk-about until the rest of the group was done shopping.
"I know we're cops, admitted one. "But they're not listening. Maybe it's the hats."
Officers participating were: Chief Rich Bialkowski, Lieutenant Jeffrey Brown, Sergeant Harold Wilday, Patrolman Cody Whittaker, Patrolman Chris Sniffen, Patrolman Joseph Rorick, Patrolman Matt Battisti, Patrolman John Sullivan, and Clerk Jen Redmond.