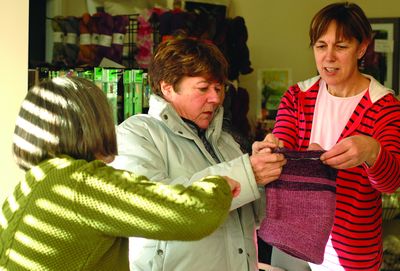 Needles clicking, skeins of yarn in every possible shade of pink at their elbows, dozens of women gathered around the table at CeCe's Wool Farm Store in Esperance Friday to knit a message for President-elect Donald Trump.
They're part of a movement to knit or crochet pink pussycat hats-officially, they're Pussyhats-for those who'll be marching in Washinton, DC on January 21, the day after President Trump's inauguration, in support of women's rights.
"Historically, knitting has brought people together, especially in rural communities," said CeCe's owner, knitter and former assemblywoman Cecilia Tkaczyk.
"This is a great way for people who can't march on the 21st to still do something"
The Pussyhat Project came out of California in response to comments President-elect Trump made publicly before becoming a candidate.
Whatever their exact shade or name, the handmade hats are all topped with a pair of meow-worthy ears.
"We have a man who's going to be President who bragged about sexual assault," said Ms. Tkaczyk. " This is a fun project-but it's a serious topic."
The knit-in at CeCe's ran from noon-7:30 and will be repeated this Friday, January 13, also from noon-7:30pm.
Throughout the day Friday, women stopped in to knit a hat or two, staying as long as they could before leaving, talking politics when prompted, but mostly talking patterns and stitches.
"Someone, I need help," said knitter Kathy Pelton of Carlisle.
Crocheter Marie Viscic of Knox is one of those who'll be marching on the 21st.
"If I didn't go, I might live to regret it," Ms. Viscic said. "It's an easy thing for me to do so I want to do it."
Also marching-and not knitting, but rather stopping by to pick up their hats-were Martha Harausz and Ellen Manning, both of Guilderland.
"Why? I want Donald Trump to know he doesn't represent me," said Ms. Harausz. "I taught for 36 years and I can't imagine teaching fifth-graders now with the things he's said. Is there anyone he hasn't mocked or bullied?"
Ms. Manning shared the same concerns and said she's also marching to remind the President-and Congress-that Americans have a right to express their concerns.
"He's really unfit to be President," she said. "I don't think he has a single policy I agree with..."
"We're just a bunch of ruffians," shouted Ms. Harausz from across the room to laughter from everyone.
Ms. Pelton and neighbor and friend Jacqueline Turnquist, also from Carlisle, worked side-by-side, neither planning to march--though Ms. Pelton took part in anti-inauguration protests when George W. Bush was elected.
"I'm not a marcher," Ms. Turnquist said. "I don't like crowds. But this is something I can do. "
Choosing her words carefully, Ms. Turnquist said she's been doing a lot of reading into what Democrats could have done differently and why people voted for Mr. Trump, things she feels it's especially important for people in rural communities to figure out.
Ms. Tkaczyk had planned to march, but she has a work conference on the 21st .
Fallout from Mr. Trump's election has hit close to home for Ms. Tkaczyk.
The sign for her shop was one of those in the village vandalized by spray-painted swastikas. (See related story; State Police are now saying that the 13-year-old arrested in the spree didn't act out of hate, but rather because the swastikas were easy to paint).
Ms. Tkaczyk also had to sit down with her 17-year-old son after a bullying incident at his school involving a Trump sign.
Together, they were able to come up with a plan of action that won't get him in trouble the next time something like it happens.
Because everyone knitting and crocheting pussycat hats Friday believes there will be a next time.
"It's going to be a long four years," sighed knitter Rosemary Agat of Esperance.
Everyone's welcome to attend Friday's knit-in.
Donations to help cover the cost of yarn are also welcome.