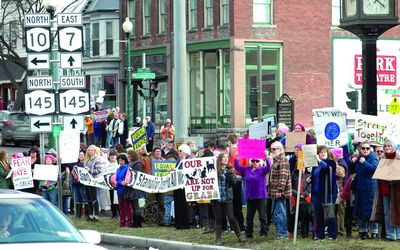 What was a trickle at 12:30 and a steady stream by 1, became a torrent that filled Cobleskill's Centre Park Saturday after a crowd estimated at 350 overflowed its Main Street start.
The Standing Together For All Women vigil was a sister action to The Women's March on Washington, an event that spawned marches and vigils across the country and around the world.
Worldwide, Saturday's events drew an estimated two million people.
Local organizers Elliott Adams, Sue Spivack, and Cindy Campbell said they would have been satisfied with a crowd of 50; vigiler Joe Franklin of Middleburgh, who couldn't go with his wife to DC-he had cows to milk-said he would have been thrilled to see half that.
"We're delighted to see this. Delighted," he said standing with a group of friends.
"Yeah, it's pretty incredible," said Mr. Adams. "I had no idea...worldwide, it's pretty amazing. Everywhere, people are marching."
The Cobleskill vigil was intended for the corner of Main and Division Streets, but as the crowd grew, Mayor Linda Holmes, herself a participant, asked the group to move to Centre Park to clear the sidewalks.
"I think this is great," Mayor Holmes said. "It's a nice, peaceful event and I think it's opening some eyes. As mayor and as a woman, I'm certainly not going to stick my head in the sand on this."
Though Saturday's topics --President Trump's comments on women, the environment, LGBT rights to name a few-were serious, the vigil was celebratory.
Dozens of cars drove by, drivers honking horns in support, and when one woman in a teal-colored Jeep yelled "Trump!" instead, the crowd still cheered her.
"She's young. She'll learn," said one vigiler in explanation.
Debra Sammons of Burnt Hills, one of the first to arrive Saturday, said she chose the Cobleskill event over one in Albany.
"Why am I here? Because I'm so outraged on so many levels," she said. "I don't want to see anyone maligned."
Michele Finin of Cobleskill said she too was outraged by President Trump's comments, "but I stand here to build a bridge. Love trumps hate."
About a third of Cobleskill's crowd was men.
Stev Hull-Allen of Rockland County said the strongest and best influences in his life have been women.
"It frustrates me that I have this privilege as a white man," he said. "I see the problems...I feel an obligation to say 'This isn't right.'"
Holding a sign "Human Rights Are Women's Rights," Dennis Shaw of Richmondville was holding down the fort in Cobleskill; his wife, daughter, and sister-in-law were marching in DC and his son was in Rochester.
Spree Squires of Carlisle, at the vigil with her 15-year-old daughter, said she was there to support "my mixed, mixed family.
"This whole thing has been so emotional," she said. "I just can't cry anymore. I feel like we've let down the entire planet. We have to come together, unified, to turn this rotten situation around."
Julia Walter, who lives a block away from the park, said she was thrilled to be able to hear the event when she left her house.
"Too many people for Main Street, Cobleskill," she said. "Who'd have thought?"
Still, pointed out Mr. Adams, the work of what some have called the counter-inauguration has just begun.
"I think every single person here needs to be responsible for keeping this going," he said. "No one can give you your rights. You have to take them.