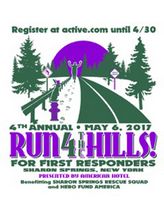 If you think the course for Sharon Springs Run 4 the Hills looks tough, imagine running it in 50 pounds of full turnout gear.
But that’s what at least 30 first responders will be doing when they turn out in their turn out Saturday, May 6, for the fourth four-mile mile run through the streets and back roads of Sharon Springs.
The run/walk will kick off at 9am at The American Hotel—which is also the site post-run festivities that include free food and refreshments, awards, and fun.
Online registration at Active.com ends April 30.
If there are still bibs available, participants can register at the American from 3-5pm the night before the race and even from 7:30-8:30am on the 6th.
This year’s race name has been expanded to Sharon Springs Run 4 the Hill for First Responders to better reflect its purpose, said Sharon Springs’ Garth Roberts, a runner who created it after seeing the devastation caused by bombs at the 2013 Boston Marathon.
“It’s a cliché, but as everyone was trying to get away from the carnage, the first responders were running it,” Mr. Roberts said.
“We see that all the time here, too, where the first responders are volunteers. This is a way to support them and also acknowledge what they do.”
Run 4 the Hills is a fundraiser for local fire departments and rescue squads—this year’s recipient will be the Sharon Springs Rescue Squad—as well as Mr. Robert’s Hero Fund America; the two will divide the event’s proceeds, which last year totaled $20,000.
The 2017 goal is $30,000.
Last year’s race kicked off the “turnout challenge” with some Sharon volunteers running the race in 50 pounds of gear.
This year, Mr. Roberts said, teams and individuals from Cobleskill and Schoharie and beyond, as well as Cobleskill Police Chief Rich Bialkowski, have also signed on to be part of the fun.
Mr. Roberts said organizers are in talks to have the Cobleskill Fire Department’s ladder truck at the finish line, flying the American flag.
“Because of the extra weight these guys are carrying, I see them running that last stretch together,” Mr. Roberts said.
“Can you just picture that? With the American flag flying overhead? The music from ‘Rocky” [the event’s theme song] blasting? And the crowd cheering them on?”
As important as the race’s focus is, it also focuses on fun; Mayor Doug Plummer’s Jello shots—both alcoholic and non-alcoholic—at the bottom of the last hill, have become a race staple.
Ditto for the food and music afterwards.
“We get so many volunteers from the community—even people who just turn out to cheer the runners to the finish line—that we bring them all together afterward just to celebrate,” Mr. Roberts said.
The longterm impact of the race continues to grow.
In December, Mr. Roberts set up the endowed Hero Fund America Foundation with the HFA’s share of the 2016 run’s proceeds.
Before 2017’s out, he said, the foundation hopes to begin awarding grants to first responders locally—and across the nation—to be used for things like education and training.
Also in the works is a September road rally for HFA that will begin with a breakfast at the Sharon Springs Firehouse and end up at the 9/11 Memorial in New York City.
For more information, email Mr. Roberts at 4thehillsrun@gmail.com.