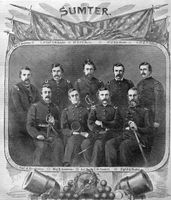 Tuesday, May 30 at 6pm at the Old Stone Fort in Schoharie, the Sons of Union Veterans of the Civil War will conduct a Decoration Day ceremony first observed in Schoharie County 140 years ago.
The public is invited to assist the Sons in ‘strewing with flowers’ the graves of some thirty-five Union soldiers in the Fort Cemetery.
The Schoharie County American Legion Honor Guard will honor veterans of other wars.
Decoration Day began in 1868 with ‘Logan’s Order.’ General John A. Logan was then Commander-in-Chief of the Grand Army of the Republic, the fraternity of Union veterans which ended in 1956 with the death of the last Union veteran. The Sons of Union Veterans of the Civil War is legal heir to the GAR.
The Corporal James Tanner Camp of Cobleskill was founded in 2004. It has been conducting Decoration Day ceremonies at the Old Stone Fort since 2009, and at the sesquicentennial of the outbreak of the Civil War in 2011, the camp dedicated the Schoharie County Civil War Monument.
The first Decoration Day observance in Schoharie County was conducted in 1877 by Cobleskill’s George W. Snyder Post #18. Founded earlier that year, the GAR post was named in honor of Lieutenant George Washington Snyder of Richmondville, an engineer and one of the ‘gallant defenders of Fort Sumter.’
Sent by Lincoln to assist in building fortifications in Washington, Snyder died of typhoid fever on November 17, 1861. His body lay in state in the Assembly Chamber in Albany, was interred with military honors in the family burying ground in the Warnerville Cemetery, and finally re-interred in Cobleskill Rural Cemetery in 1913.
On Schoharie County’s first Decoration Day, Wednesday, May 30, 1877, Post Snyder formed on Main Street in Cobleskill at 9am, marched two miles to the Warnerville Cemetery, and decorated the grave of Lt. Snyder.
At 1pm, the post again formed the line of parade, now embellished with a cornet band, two fire companies, a floral wagon, and carriages for the orator, chaplain, legal fraternity, board of education, and faculty of the Union Free School and Academy. Bringing up the rear were the pupils of the public school and citizens.
The procession, “nearly a mile in length,” according to the Cobleskill Index of June 7, 1877, wended its way to the Cobleskill Rural Cemetery where the formal ceremonies took place over the grave of Dr. Thomas Lawyer, “a worthy son of a noble sire.” Lawyer was an assistant surgeon in the 43rd Infantry who died, on his way home, of typhoid fever in Philadelphia on August 22, 1862.
Rev. W. H. Lord Starks of the Methodist Church gave the address, which was printed in full on the front page of the Index. “Can you or I ever forget,” he asked the two to three thousand in attendance, “when the first gun upon Fort Sumter shot through the heart of the north? When the words ‘Fort Sumter has been fired upon’ flashed along ten thousand lightning wires...”
“We have a heroic history,” Starks reminded the citizens of the century-old republic. “Our three great conflicts...constitute the crucible in which she has been refined to her present glorious perfection...let a monument go up for our patriot dead, if marble white enough for it can be found...you have the blood of revolutionary sires coursing through your veins...keep it pure from all admixtures of leaven that will so change and modify as to render it incompatible with its special purpose.”
Finally, warned Starks, “the time will come when this Post and all the comrades now composing the national organization will, by the gradual, and constantly thinning out of their ranks by the hand of death, be numbered among the Grand Army of the past...we bequeath to these youth, and the youth of our land... the care of the Union soldiers living and the decoration of the graves of the Union soldiers dead.”
One hundred and forty years later, the Sons of Union Veterans will honor that behest.