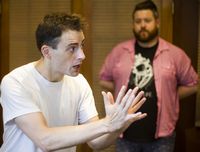 All the world’s a stage and and no more so than at Sharon Springs’ Chalybeate Park, where afternoons Wednesday, August 9-Tuesday, August 15, the newly-formed Brimstone Creek Productions will stage William Shakespeare’s “As You Like It.”
The daily 1pm performances are free; bring a lawn chair or blankets and a picnic, urges Brimstone Artistic Director John Cormier-Burke, and visit the Forest of Arden.
For those who’ve forgotten their high school English lit, “As You Like It,” likely written in 1599, tells the tale of a Duke, who forced into exile in the Forest of Eden, finds liberty in his banishment, a Fool who finds wisdom in a Shepherd, and Rosalind and Orlando, who “find each other in the space between mistaken identity and love at first sight,” explained Mr. Cormier-Burke.
“But mostly, it’s a lot of fun,” he said from New York City, where rehearsals kicked off just a few days ago.
Though Brimstone Creek Productions is new and this is the first show Mr. Cormier-Burke has produced, he’s been acting since he was 9 and has worked in show business all of his life; he’s just finishing a national tour of “Annie.”
Mr. Cormier-Burke and his husband bought a home in Sharon Springs a few years ago with thoughts of starting a business as a way to contribute to the community.
Instead, after learning about efforts to turn the 1885 Klinkhart Hall into an arts center, he created Brimstone Creek Productions and set about casting the deliberately-chosen “As You Like It.”
“I really see my life and the friends I’ve made in Sharon Springs in the characters in the play,” he said. “John Hall, Doug Plummer…
“Moving to the country is sort of my own self-imposed exile and Sharon Springs is Arden. Like the characters in the play, I’ve discovered a new life in the country and a new freedom. I didn’t really expect any of that.”
Though some people may fear Shakespeare is too high-brow, Mr. Cormier-Burke said there’s a reason plays like “As You Like It,” are still performed and enjoyed 400 years after they were written:
“At the end of the day, these are people trying to get other people to do something—or to not do something,” he said.
“Everyone identifies with that. These are humanbeings who are going through the same things we’re going through today. Plus, they’re a lot of fun.”
The “As You Like It,” actors will interact with the audience, who’ll stand in for members of the court.
Rehearsals in Chalybeate Park will run August 6-8 and anyone interested in following the production as it develops can find social media links at Brimstonecreek.net.
Mr. Cormier-Burke said the production is serving as a sort of barometer for what’s possible in Sharon Springs.
“We don’t know if we’ll have a few people or a crowd,” he said, “but we’re hoping a lot of people will turn out to enjoy this—and come back again.”