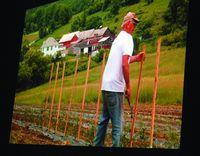 There’s no arguing the economic importance of dairy farming to the entire Northeast.
But what are we going to do about it?
That’s the question the film “Forgotten Farms” asks and one about 350 people tried to answer last Tuesday at a Cobleskill screening of the 2015 documentary.
Sarah Gardner, who produced the film, said it was never intended for farmers, but rather as a way to tell their story to people who don’t understand the industry’s impact on their local economy.
“This IS probably our 60th screening and one of our best crowds,” Ms. Gardner said beforehand. “It’s great to see such a diverse crowd. Young farmers, older farmers, and a great turn-out from the community…”
Tim Holmes and Andrea Clapper were two “not-farmers” who turned out for the film—though Mr. Holmes grew up on a farm in Lawyersville.
“We’re here because we’re surrounded by farms and we understand their economic importance,” Mr. Holmes said.
“These farmers are our neighbors…they farm some of our land.”
Free ice cream sundaes didn’t hurt either.
“Forgotten Farms” shares the stories of about a half-dozen New England farmers who talk about how they got into dairying, its challenges, and why they continue to milk cows, even as it gets harder to pay their bills.
It also features agronomists and other farm experts, again stressing dairy farming’s role in the economy, and includes a segment on “niche” farming.
“You can’t pay the bills with sympathy,” says one of the farmers.
Another draws laughter as she calls herself a “trophy farm wife”--because she’s strong enough to get behind the cow and push.
Retired farmers remember when it was enough to milk 20 cows and farm kids talk about family—and what it’s like to be teased for backpacks that smell like the barn.
Ms. Gardner and Dave Simonds, the film’s directors, were among the panelists in a discussion that followed the film.
Also on the panel were state Agricultural Commissioner Richard Ball, Congressman John Faso, and Jacob VanEvera, who with his wife, Lydia, has just started dairying on his in-laws’ former farm in Lawyersville.
Jason Evans of SUNY Cobleskill’s Institute for Rural Vitality moderated the hour-long discussion.
“I think the economic message of the film was huge,” Commissioner Ball said afterwards.
“When we talk about policies, we need to remember these dairy farms are worth millions of dollars.”
Mr. VanEvera said he’s had people stop by to thank him for being a farmer, but most don’t realize how complicated dairy policy is.
Even the farmers—and experts--in the film couldn’t explain how milk prices are set—something everyone in the auditorium could identify with.
Congressman Faso, a member of the House Agriculture Committee, told the crowd that the issues discussed in the film will be in the forefront of his mind as they begin work on the next Farm Bill.
Industry challenges for Congress to keep in mind, said Commissioner Ball, include a failed immigration system and the need for farm worker problems.
Mr. Simonds said he sees room for the new food movement and traditional dairying to work together—and he hopes the film will help.
“The local food movement, people who want to know who you are…what you’re doing, that’s exciting,” Commissioner Ball agreed.
Though that’s harder for dairy, “Now we need to get better at telling your story.”