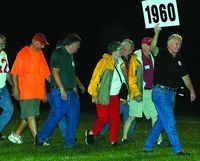 Cobleskill and Cobleskill-Richmondville looked back on 50 years of football Friday night.
Hundreds of Red Devils, Bulldogs and fans of both turned out in the rain to celebrate the golden anniversary at the high school.
Tents covered tables packed with memorabilia––scrapbooks, yearbooks, helmets, uniforms, awards, photos and more––that the crowd enjoyed before the Bulldogs’ opening-season game against Averill Park.
One of those taking in the history was Peter Mesick, co-captain of the Red Devils’ first team in 1968.
“I’m surprised so many came back,” Mr. Mesick said. “It’s good to see so many again.”
Mr. Mesick, who scored Cobleskill’s very first touchdown off an interception, reminisced about the first season under then-new Coach Frank Collins.
“Frank was tough on us, but he had to be,” Mr. Mesick said, noting that none of the players had football experience.
“It wasn’t until the last game that we really knew what we were doing.”
At halftime of the Bulldogs’ game, High School Principal Brett Barr announced former coaches, who came to the middle of the field, and also called out the players by decade.
And, as former players and cheerleaders walked onto the field, Mr. Barr recounted highlights of each decade.
He also introduced, as parade marshal, Joe Moore, who manned the sideline chain gang for more than 20 years.
Mr. Barr then turned the mic over to Coach Collins, who thanked Randy Pacatte and Trisha Miller, chief organizers of the anniversary. Coach Collins also thanked all who helped over the years: groundskeepers, bus drivers, rescue squad volunteers, and especially players, cheerleaders and fans.
“I’m a real happy guy,” Coach Collins said. “This is great tonight.”