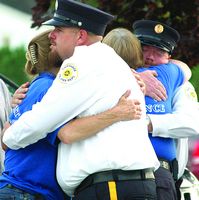 It was Schoharie’s turn to offer solace, comfort and shoulders to cry on Wednesday as hundreds wrapped their arms around the families of those killed in the Route 30A crash and the volunteers who tried to help.
The mood was quiet and somber as the crowd filled the Schoharie Central School gym, filing past comfort dogs and clutching bottles of water; rescue volunteers waited to walk in as a group.
And so they were outside when Mary and Kyle Ashton walked up, pulling out photos of their son, 34-year-old United States Marine Corps veteran Michael Ukaj of Johnstown, killed on his birthday and the last of the 20 from the crash to be identified.
“He was a wonderful guy, you would have loved him. Everyone did,” said Mr. Ashton.
“We were so proud of him,” said his mother. “Two tours in Iraq. Can you imagine? He was there when he re-enlisted.”
“He was that kind of a kid,” added his dad as pulled photos of Michael from his wallet and handed one to Central Bridge Rescue Squad volunteers to keep.
“This is the man you tried to help…thank you.”
In the gym, a dozen clergy members spoke to the need to have faith even as the families, volunteers, and community struggle to make sense of the tragedy.
Behind them hung a banner, “Schoharie Valley Strong.”
“It’s with heavy hearts that we open our doors to community tonight,” said Rev. Jim Wolford. “We recognize the strength and dedication of our first responders…Our community is strong.”
Group-by-group, the rescue volunteers were recognized and stood to applause from the crowd; the victims’ families then stood and turned to offer them their own applause.
“It’s going to take a long time for everyone to come to terms with this,” said Assemblyman Chris Tague, himself a longtime volunteer, gathering his thoughts before the hour-long vigil began.
“I’m really worried for a lot of these folks…”
So is Congressman Paul Tonko, who lives in Amsterdam, where many of those killed in the horrific crash also lived.
“How are you doing? How are you doing?” he asked again and again as he made his way through the crowd.
“We’re such a small community…it hits so hard,” he said. “We grew up with these families…”
Offering words of support from Governor Andrew Cuomo, Lieutenant Governor Kathy Hochul spoke to resilience and reminded the crowd of how the country came together after 9/11 and didn’t let politics divide it.
“We were better people and we put our country first,” she said. “We turned to our clergy, we connect with people who are strangers. Remember: What’s going on here today is far more important than our politics.”
And though their families will always struggle with their losses, Lieutenant Governor Hochul vowed there will be answers to the question of why the limousine was even on the road.
“We will find the answer to that question,” she said.
Rev. Colleen Quiron was out of town at a conference when she first heard of the crash and when others there learned where she was from, she told the crowd, many burst into tears.
“You have something now in common with millions of people around the world,” she said. “They are there to share this awful burden…”