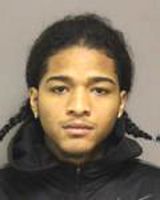 New York State Police at Oneonta arrested Edgar R. Gonzalez-Francis, 20, of Worcester for the felony of first-degree unlawful imprisonment and the misdemeanors of second-degree menacing and fourth-degree criminal possession of a weapon.
On October 29 at approximately 2:15pm, troopers were dispatched by Otsego County 911 to a report of a subject with a gun holding two people hostage at a residence on Main Street in Worcester.
When troopers arrived, the hostages exited the front of the residence but Mr. Gonzalez-Francis remained inside allegedly armed with a shotgun.
A perimeter was established and Worcester School was placed on lockdown.
Attempts to make contact with Mr. Gonzalez-Francis were unsuccessful.
A short time later, he was located at a nearby location and taken into custody at about 5:05pm, without incident.
The shotgun was recovered near the residence and secured by troopers.
Mr. Gonzalez-Francis was arraigned in the Town of Worcester Court and remanded to the Otsego County Jail on $15,000 cash or $30,000 property bond.