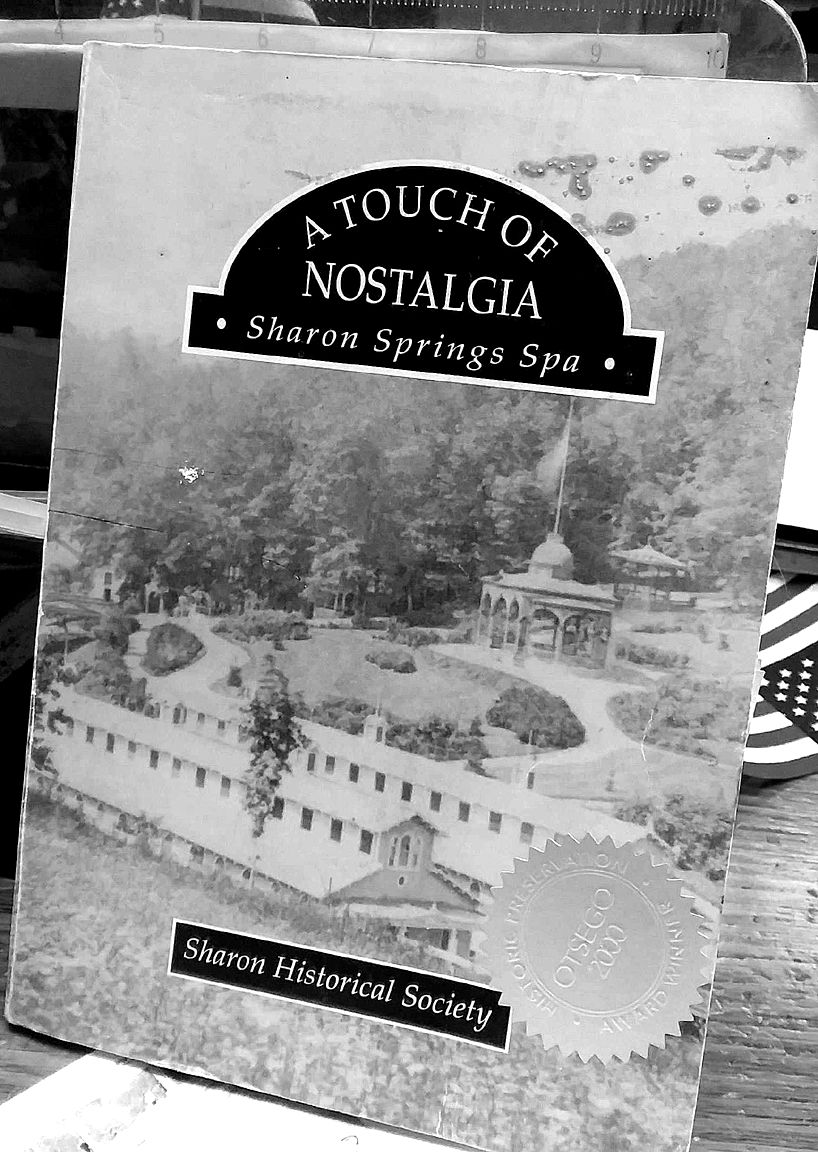 Some 20 years after the Sharon Historical Society first published its “A Touch of Nostalgia, Sharon Springs Spa,” a 120-page history of springs, baths, and resorts that begins with the Iroquois and ends with the chapter “Changing Times,” volunteers are nearly finished with an updated edition that adds Beekman 1802, Sharon Springs Inc., the Roseboro Hotel, and other village businesses—back—into the story.
The Times-Journal has been working with SHS’s Sandy Manko and Karen Cookson since last fall to put the book together; one of its highlights is an additional chapter with color photographs that brings the resort town’s history up to the present.
Plans are to have the book available for purchase at the SHS Museum and other locations before summer.
Ms. Manko, who wrote the new chapter and gathered the photos, said so much has happened in Sharon since “Nostalgia,” was first published in 1996 that the SHS realized it was time for an updated version.
“A lot has happened in 20 years,” she said. “With all of the changes in the lower village and our new businesses and the projected spa, we felt we needed an update. There’s a small renaissance taking place here and we wanted to reflect that.”
There’s also a more practical reason for the updated version: The SHS has sold out of both the original run and a later reprint.
“Nostalgia,” was followed by “Reflections on Sharon 1797-1997” in honor of the town’s bicentennial—which the SHS also plans to reprint.
But Ms. Cookson said it’s the spas and treatments detailed in “Nostalgia,” that draw the most interest and curiosity.
“Beginning with the Native Americans and today, with what Sharon Springs Inc. is proposing in Korean-style spas, our waters and the medical treatments are why people have always come,” she said.
SSI and Beekman 1802 are two of the reprinting’s major sponsors.

In one of the SHS’s biggest ever other undertakings, volunteers are seeking donations for a live auction at the Roseboro Hotel on Saturday, July 20, beginning at 1pm.
Doug Cater will be the auctioneer for the event; there will also be a silent auction going on at the same time.
Money raised by the auctions will go toward the reprinting of “Nostalgia,” but also toward the cost of upkeep at the museum.
The auction’s theme is Sharon Springs and items already donated include watercolors by local artist Michael Whaling, historical collages donated by Ms. Manko and her husband, Walt; a copper antique serving piece from the Brooklyn House, and a set of architectural etchings by Jacque Lodes.
Local artisans are also donating unique items and services—music for a special occasion, a wedding makeover, a sit-down dinner for eight—will also be on the auction block.
“It doesn’t just have to be Sharon Springs, Ms. Manko said. “We have a lot of talent here and a lot of interest in the history of nearby towns. This is going to be a fun event and everyone is going to want to be a part of it.”
For more information on donating to the auction, contact Ms. Manko at (518) 284-2135 or email SHS President Lori Nolfo at lorinolfo@gmail.com