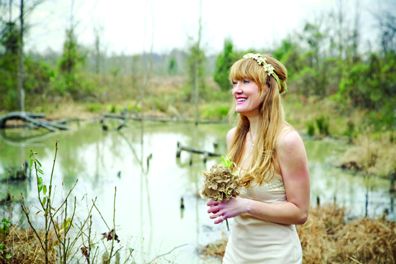 Angela Easterling’s never been to Sharon Springs, but when she takes the stage in Chalybeate Park it will be a coming home of sorts: a reunion with conductor, mentor, and friend Kevin Finn-Padilla, who recruited the Greenville, South Carolina singer-songwriter to kick off what he hopes will begin a music series for the Klinkhart Hall Arts Center.
Tickets are now on sale for Ms. Easterling’s Saturday, August 10 concert at Klinkhart.org/music or Angelaeasterling.brownpapertickets.com.
Limited seating will be available at the door; both seats under the pavilion and on the lawn are available.
Cobleskill musician Larry Mazza will open the event at 5pm, followed by Ms. Easterling and her partner Brandon Turner at 6pm.
The event will be held rain or shine and will feature High on the Hog and Buena Comida food trucks along with the Back Barn Brewery.
Mr. Finn-Padilla said he first met Ms. Easterling in 1996, when she was studying at Emerson College and he was conducting Lloyd Webber’s “Joseph and the Amazing Technicolor Dreamcoat” in Boston.
Over the years they’ve stayed in touch, and when Mr. Finn-Padilla joined the KHAC board, he said she was his immediate go-to for a kick-off concert.
“We’re a fledgling organization with limited capital…I knew that if she was touring…the economy for us to present even one, great concert would be doable.”
Mr. Finn-Padilla said he’s also pleased to be bringing Mr. Mazza—a musician in his own right and not usually the opener--to Sharon Springs
“But his style is a wonderful fit with Angela’s and he’s a great supporter of what we’re trying to do.”
Ms. Easterling has been performing and touring for about 12 years and has put out five albums; she counts Emmy Lou Harris, The Byrds, and Neil Young among her influences.
“I never listened to country music growing up,” she said. “But when people heard me, they said ‘That’s country.’ And then I listened and I said, ‘If that’s country, then I guess I am.’”
Though she started her career in California—in acting-Ms. Easterling moved back home after she realized there’d be more opportunities for her music and a life there.
And though it’s been years since she played in upstate New York, she said she’s always excited by small-town arts efforts like Klinkhart’s.
“When I tour, I don’t play Boston, but Plymouth,” she said. “I work with a lot of smaller arts organizations and I’m excited to be part of this.
“Kevin is such a fabulous musician…I’m so honored that he thought of me.”