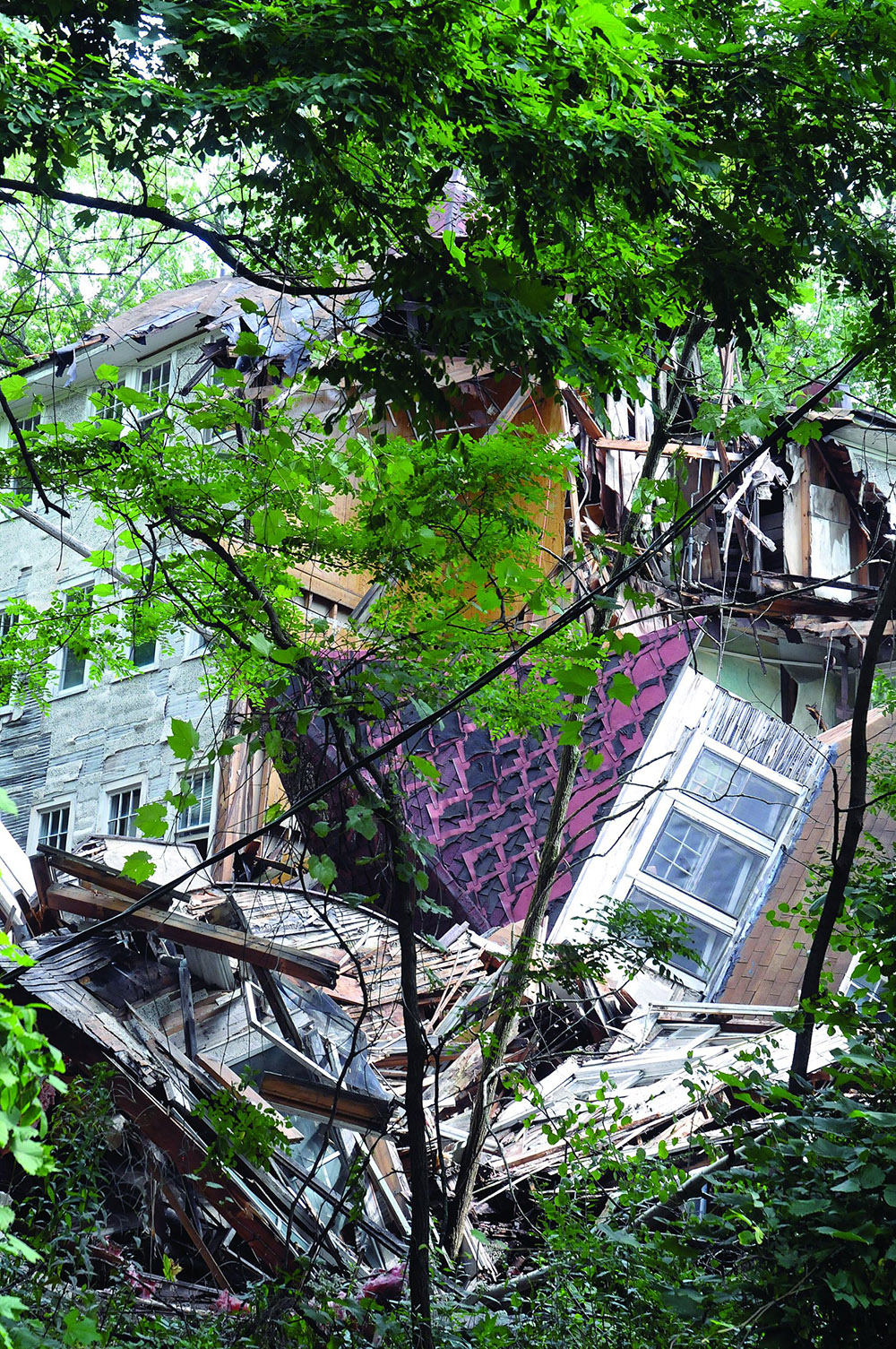 What started with a bang “like a FedEx door slamming,” then turned into a roar “like an 18-wheeler going up South Street,” ended up with the front half of the 1927 Empire Hotel on the ground in a pile of dust and debris Wednesday afternoon in Sharon Springs.
Once a grand building that loomed over 102 Willow Street and distinguished by three corner towers, a jeweled stucco exterior—literally, stucco was applied and then bits of colored glass were placed in the stucco--and a wrap-around porch, the Empire was described as “seriously dilapidated” in Schoharie County’s May auction of back-tax properties.
It sold—for $7,000--Mayor Doug Plummer said at the scene, but when the would-be new owner saw the condition of what he’d bought, he pulled back the bid.
Within hours of the disaster, Mayor Plummer and trustees had a lead on possible funding from the state’s Office of Homes and Community Renewal that seems tailor-made for what’s now a demolition project; there’s no required match and no funding cap.
That’s good, Mayor Plummer said, because off-the-cuff estimates put that at $100,000.
“We’re taking the steps we need to see if we can get the ball rolling on this,” he said.
Among them: Declaring it an emergency situation, condemning the building, and placarding the site.
Throughout the afternoon and evening Wednesday, neighbors and others who’d watched the building’s deterioration accelerate in just the past months took photos of the debris, capturing scenes of a single exposed sink hanging off what was once an interior wall, tangles of old beds and mostly-unbroken windows, and in the foreground, one of the towers.
“This is one of the saddest things about being mayor,” Mayor Plummer said. “Losing all of these grand, old buildings. In its time, this was magnificent. And there’s not anything that we can do.”
Though they’ve tried, said Deputy Mayor Denise Kelly, who was also on the scene last Wednesday, juggling multiple phones as she and Mayor Plummer tried to reach National Grid about trees the falling building dropped on power lines.
Deputy Mayor Kelly said they’d toured the site with the state Land Bank and Historic Preservation.
“But it was too far gone,” she said.
Because the county never took over ownership of the three-quarter acre parcel, it’s still owned by Spyridon Livathinos.
Mayor Plummer said Mr. Livathinos has been issued multiple citations and orders to remedy over the years, but has ignored them and the village is now looking at legal action.
“There’s no choice,” he said.
“It has to come down.”