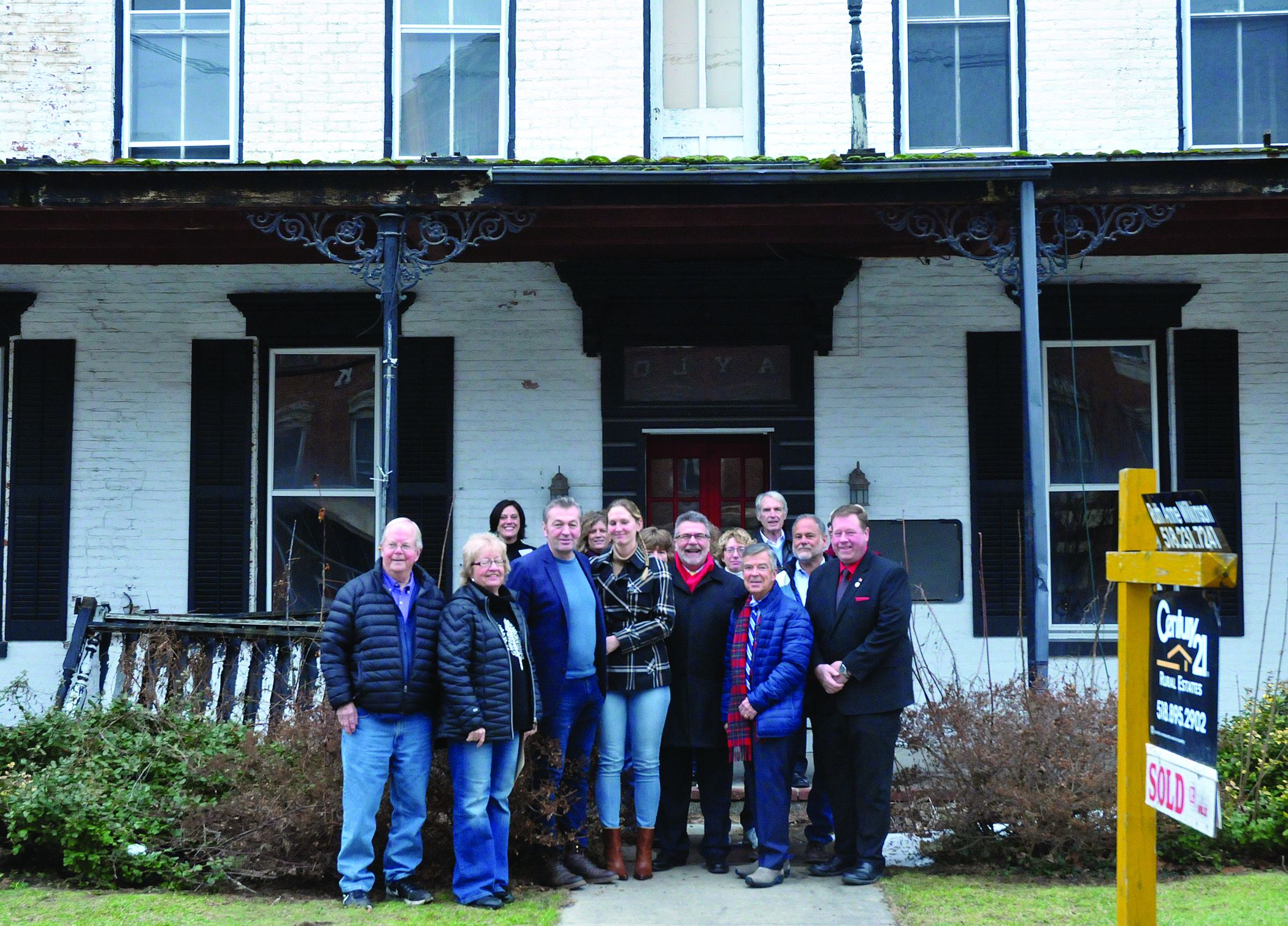 It was a giddy, giddy day in the neighborhood Friday when Schoharie turned out to celebrate what everyone hopes will be a turning point for Main Street:
The sale of the 1875 Parrottt House to Nick Ahmetaj and Alex von Zehle from Windham.
Among those on hand for photos and handshakes all around were Ruth Anne Wilkinson, the realtor who handled the sale for Century 21 Rural Estates; Assemblyman Chris Tague, who remembered plenty of good times in the once-thriving restaurant and bar; and Tom Putnam, chair of SEEC—the Schoharie Economic Enterprise Corporation.
“This is going to be big for this community, getting this place back open,” said Assemblyman Tague, the first to arrive at the scene.
“We’ve got great things going on here, but getting this back on this side of the street…it’s going to bring people back to Schoharie.”
“It’s a wonderful day and a long time coming,” added Ms. Wilkinson.
“When all of the lights were off after the flood, this was the first place they were back on. Now, to bring it back…It will be wonderful.”
A longtime Main Street anchor, the Parrott House was severely damaged during Hurricane Irene in 2011 and has been vacant since 2012.
After Irene, the Village of Schoharie created a Long Term Community Recovery Strategy to help revitalize the community; among its goals was revitalizing Main Street by rehabbing the Parrott House.
The Governor’s Office of Storm Recovery helped by sponsoring a study that looked at the building’s structural, HVAC, plumbing, and electrical needs.
The GOSR also sponsored a marketing study.
“These efforts have been instrumental in the village’s efforts to obtain grants for eventual use in the revitalization of the Parrott House,” Ms. Wilkinson said; lodging—there are about 30 rooms on the buildings second and third floors for potential rehab and development—will be key to the project’s success.
The first floor has been gutted.
“They got at it just the right time before it was too far gone,” said Assemblyman Tague.
In 2015, Dennis and Ruth Coughtry bought the building and started restoration, but that work stopped when they moved out of the area; plans by the village to use grant money to buy and restore the Parrott House also fell through when 2017 estimates for the work came in considerably higher than expected.
Just last month, the Village of Schoharie was awarded an additional $500,000 in State Regional Economic Development Council awards for the Parrott House.
Working with SEEC—SEEC reps met with Mr. Ahmetaj and Ms. Von Zehle after they closed on the building Friday—the village will help funnel grants and private equity into the project, but won’t contribute financially, Mayor Larry Caza said.
Additionally, the entire Village of Schoharie is now on the National Registry of Historic Places, something that makes state and federal tax credits available for projects like this.
Mr. Ahmetaj and Ms. Von Zehle have a background in contracting and the restaurant business and said they’re anxious to begin work on bringing the building back to its original character.