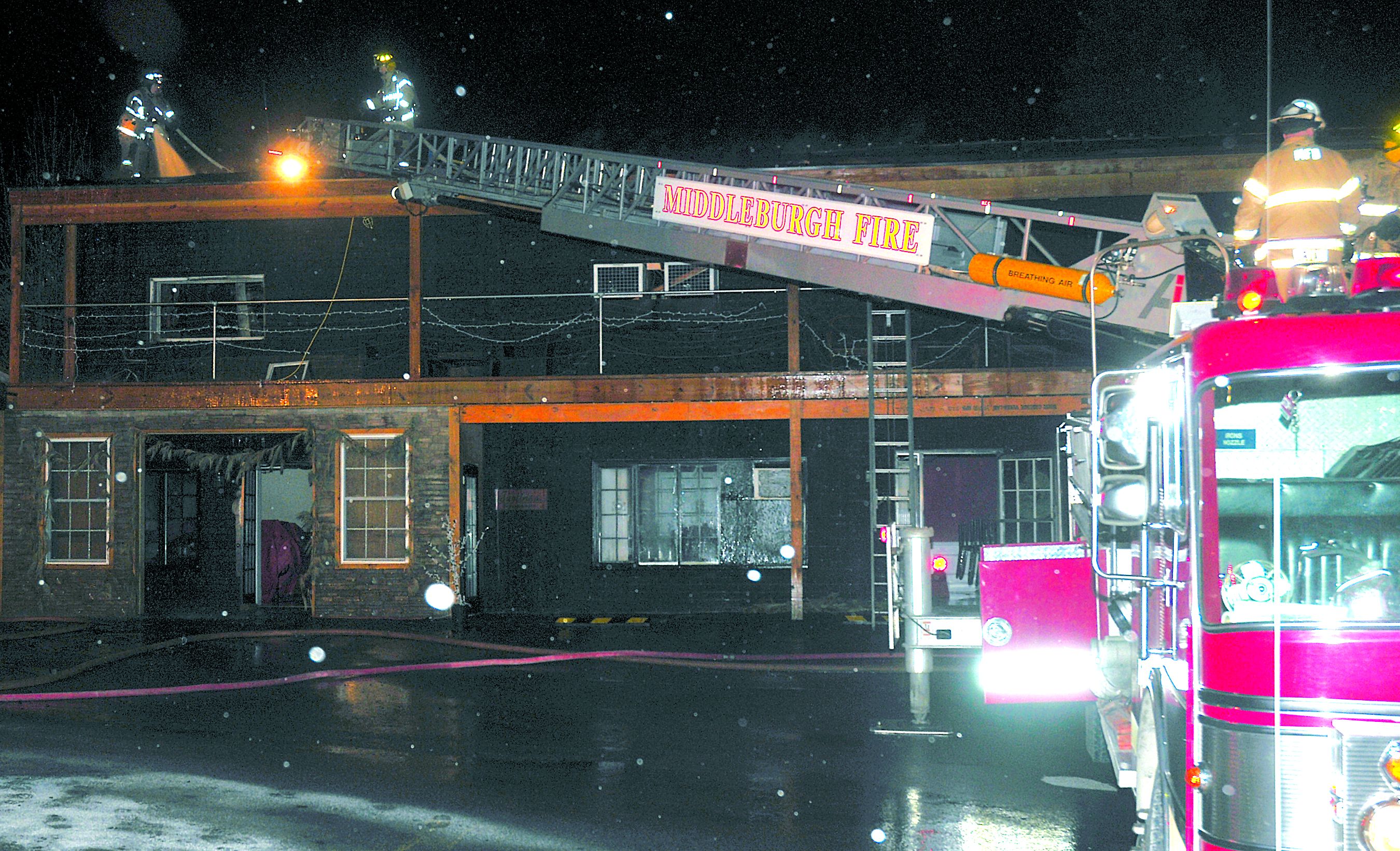 Fire early Monday morning heavily damaged Justine’s, one of Cobleskill’s most popular restaurants.
Investigators determined late Monday that the fire started in an upstairs kitchen and storage area, according to Cobleskill Fire Chief Rick Albert.
A Harder Avenue neighbor called in the alarm about 4:15am.
Two propane tanks in the upstairs kitchen vented out, as they’re supposed to do when heated, and the tanks didn’t explode.
“The propane tanks were the biggest problem,” Chief Albert said. “If they hadn’t vented out, the fire would have burned another half hour before somebody found it out.”
Firefighters got water on the tanks to cool them, but still, the fire burned through an upstairs door into the banquet area.
The upstairs additions and roof are badly damaged or gone, Chief Albert said, but firefighters using Cobleskill and Middleburgh ladder trucks got on the roof to get the fire under control.
“There’s structural damage in the roof in front,” Chief Albert said, “but no fire damage downstairs.”
Firefighters covered downstairs furniture and kitchen equipment with salvage tarps to limit the damage.
The downstairs dining area and a new bar owners Steve and Joanne Salerno built and opened this fall survived the fire but suffered heavy smoke and water damage.
In fact, the Salernos just held a soft opening for the new bar on Thursday.
“Both Steve and Joanne were about as happy as they could be to show off the new space,” said Bruce Tryon, who was invited to the opening.
“For this to happen only a few days later is truly devastating.”
Whether the building can be saved is undetermined.
“It’s a block building, so in my experience, it’s repairable,” Chief Albert said. “But that’s up to insurance.”
Investigators narrowed the cause to kitchen appliances but couldn’t go any further.
“There was too much damage for them to pinpoint the cause,” Chief Albert said.
There were no injuries.
Besides Cobleskill and Middleburgh, the Schoharie County and Worcester FAST teams and volunteers from Carlisle, Richmondville and Central Bridge were on the scene, as were the Cobleskill Rescue Squad and AMR.
The response from the community was strong. Justine’s opened in 2010, and the Salernos have been deeply involved in many Cobleskill causes and activities with Cobleskill-Richmondville Central School. (See related story.)