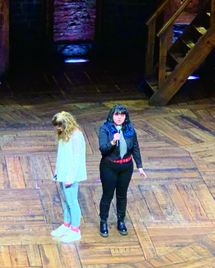 No musical has sparked more interest in the history of America’s founding than Lin-Manuel Miranda’s “Hamilton.”
So much so that four and a half years after it opened at New York’s Richard Rodgers Theatre, even mid-week matinee tickets start at $300—if you can get them.
But not only did Sharon Springs Central School sophomore and juniors get to see firsthand what all the fuss was about last Wednesday, they also got to see two of their classmates perform their own “Hamilton” piece on the same stage that made writer and actor Lin-Manuel Miranda’s a household name.
Isabella Schuler and Jillian Bent’s “After the Dual,” was one of 13 acts selected to be performed on Broadway through a Hamilton Education Program created by the Gilder Lehrman Institute in New York City that included classroom lessons on primary sourcing, student performances, and $10 tickets to a Broadway performance of the smash rap, hip hop, and R &B hit.
“I’m obsessed with “Hamilton”,” said Jillian, who like Bella, saw the musical on the Proctor’s stage in 2018.
“The story, the music…it’s just a part of my life. As soon as I heard about this, I knew what an opportunity it was and I told Bella ‘We’re doing this.””
Bella didn’t need any convincing; she’s had roles in a handful of SSCS musicals and after performing there, she knows she wants to be on Broadway.
“It also taught me that I can really get engaged in history,” she said. “The story of immigrants that Hamilton tells…it really hit home for me.”
The Gilder Lehrman Institute’s Hamilton Education Program was created for Title 1-eligible schools; Superintendent Pat Green stumbled upon it while looking for opportunities to expose students to a different kind of history and so far, he believes SSCS is the only Capital Region School to have taken part in it.
“It was an amazing opportunity to introduce our kids to history in a way they never thought about,” Mr. Green said.
“We never thought we’d end up with two of our students performing…They did a fantastic job and we’re very, very proud of them.”
All of the participating SSCS students put together some sort of two-minute performance piece; a committee chose Bella’s and Jillian’s to advance and after viewing a video of it, the Lehrman team agreed.
Typical teenagers, they said, they procrastinated, putting the piece, which reflects on Aaron Burr’s mental state after shooting Alexander Hamilton in that famous duel, together in just four of five days.
“We work well under pressure,” Jillian said.
Jillian is a state officer in FBLA and used to public appearances—but not performing on stage.
The fact that she had nothing to lose, made it easier, she said; there weren’t as many butterflies as normal.
Bella, on the other hand, was “all nerves”—until the show started.
“Then I felt at home,” she said. “It was the most natural thing in the world. Afterwards, kids were patting us on the back…yelling our names. It was great to have our school there.”
For Mr. Green, he said Isabella’s and Jillian;s success only shows what SSCS kids can do when given the opportunity.
Music teacher Sylvia Letteron, who worked with the two girls and was also one of those who made the trip, agreed.
“It was definitely a career highlight,” she said. “Having these students chosen to do their piece on the Broadway stage of Hamilton is an affirmation of what we as teachers strive to accomplish.
“It’s a validation of hard work, creativity, and technical training. And it’s such a pleasure to see our students succeed.”