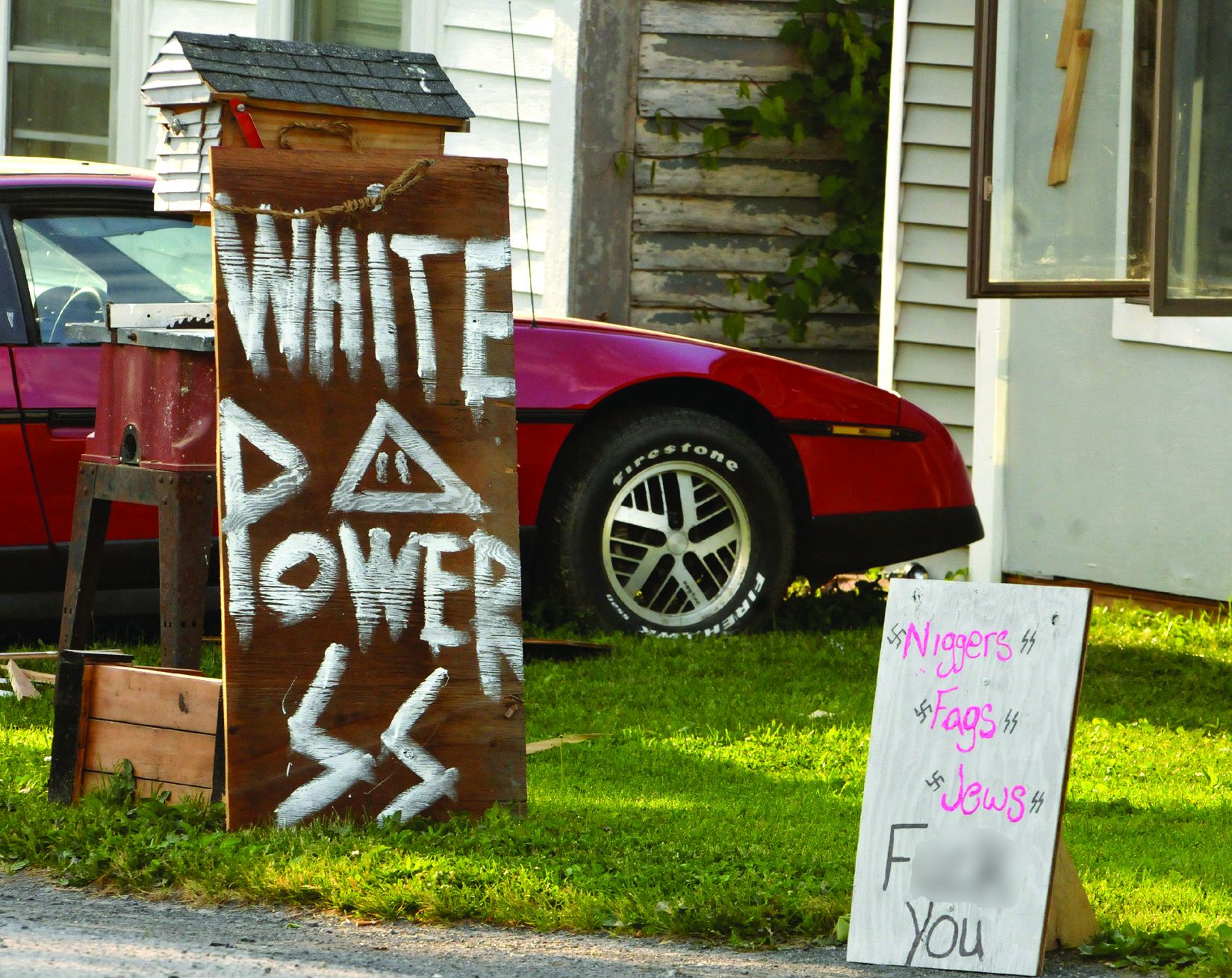 Hatred inspired by a small turn-out of KKK supporters in Fort Plain Saturday has spilled over into Argusville with signs supporting white power and attacking “niggers, fags, and Jews.”
The signs have since been destroyed—smashed and piled up in front of the 127 Church Street home where they stood—but “White Lives Matter” painted on a bridge going into the Town of Carlisle hamlet remains.
Police are investigating and continue to patrol the neighborhood.
127 Church has long been a source of hate, said neighbors, who have long ignored its homemade swastikas.
But coming on the heels of George Floyd’s murder and protests that have turned violent across the country—plus the fact that after a small, peaceful protest in Fort Plain, a handful of counter-protestors showed up in Haslett Park and at the Fort Plain Stewart’s, wearing KKK-emblazoned t-shirts and waving Confederate flags—they’re afraid.
And mad.
Eva Cienfeugos lives four houses away.
The signs on her front lawn call for Respect for All and point out that Black Lives Matter, and she flies a gay pride flag.
Ms. Cienfeugos is Puerto Rican and feels she and gay neighbors and friends are being targeted.
“I don’t feel safe,” she said late Sunday. “Not anymore. For a long time, I ignored the things I saw there, but I can’t anymore. The neighborhood doesn’t feel safe—even for my white neighbors.”
Ms. Cienfeugos said she and others called police and though they’re keeping an eye on things, she understands there’s nothing they can do; that the people who rent 127 Church aren’t doing anything illegal.
“We don’t want this to escalate,” Ms. Cienfeugos said. “But what’s next?”
John Bartenstein and his husband live a quarter-mile down the road.
In the 3½ years they’ve lived there, he said, they’ve felt nothing but welcomed—by neighbors and friends in Sharon Springs and Cobleskill.
“But to see that? Those signs? It’s a direct threat to us. It’s not OK and it’s important to take a stand and speak out,” he said.
Photos of the signs as well as Facebook profiles of those neighbors say are responsible, along with videos of the incidents in Fort Plain have spread virally on the internet.
By Monday afternoon they were reporting the Argusville signs had been destroyed.
Nick Drummond, friends with both Ms. Cienfeugos and Mr. Bartenstein, said it’s important to call out things like this.
Even when it means an uncomfortable conversation, Mr. Drummond said, it’s an important one to have.
“We need to acknowledge that racism like this exists in our own backyard, our communities,” he said.
“This instance is extreme, but racism like this does exist here and also in many less obvious ways. We need to recognize it and speak up and do everything we can to fight for equality.”
,