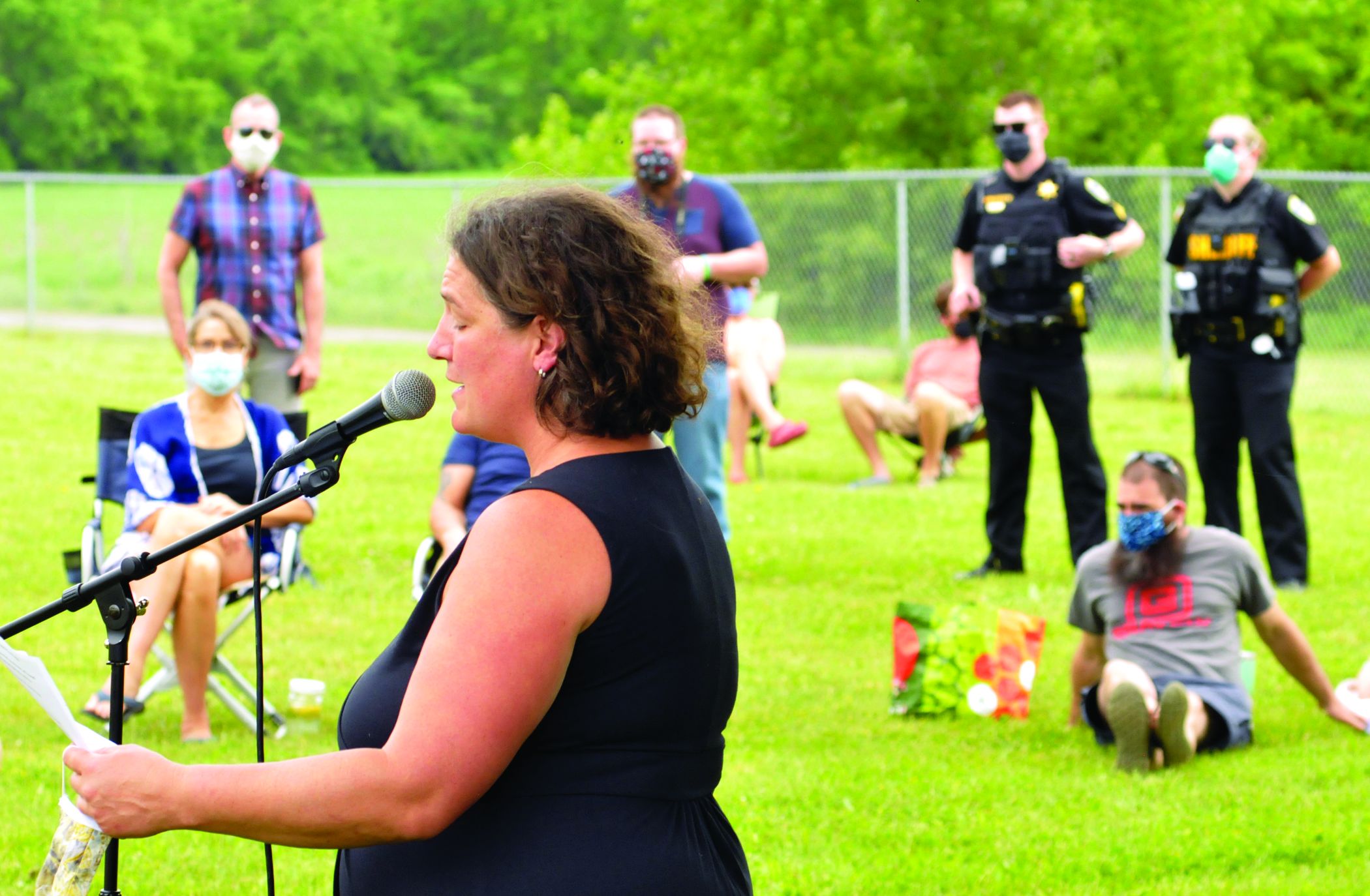 Fifty acres and two parks wasn’t enough Saturday to contain local outrage over the murder of George Floyd.
More than 125 peaceful protestors gathered to hear speakers calling for an end to racism in Cobleskill’s Doc Reilly Park while in Centre Park, another dozen—some of them the same—marched and also stood with signs insisting Black Lives Matter.
It was a frantic few days for Theresa Heary and the others who’d planned a vigil for Centre Park for Thursday.
That vigil was called off after someone shared the event “to the wrong people” on Facebook and it drew what Cobleskill Police Chief Jeff Brown called “veiled threats” of violence.
Ms. Heary spent the next few days talking with Chief Brown and Schoharie County Sheriff Ron Stevens, sharing her concerns and seeking their support before moving the vigil to Doc Reilly.
“It’s important for us to be here,” Sheriff Stevens, said beforehand.
“We’ve got to learn to love and respect each other. We need to get through this healing. It’s not good for anyone.”
“I’m glad it worked out,” added Cobleskill Mayor Becky Terk, also on-site.
“I hope it’s everything they want it to be.”
And it was.
The hour-long event featured a half-dozen speakers, including Patrick Harrison, a black man introduced by his 30-year friend, Pastor Ray Richards, who shared his own story of being pulled aside and questioned in Wal-Mart.
“It was humiliating,” he said, and he worried. “If it had escalated, would I have been one of those people on the news?”
(See vigil coverage and photos on page 20.)
Not everyone agreed with the vigil’s final location—and so they held their own at the same time in Centre Park.
Kari Waid led that effort.
Ms. Waid said she was angered over the threats that cancelled original plans at the much more visible Main Street site.
“I wanted this to be seen, to be out there as much as possible,” she said. “I wanted it known that people weren’t going to scare us off.”
That was fine with Ms. Heary, who said neither rally was the first—nor would either be the last.
George Floyd, 46, died May 25 in Minneapolis, Minnesota after Police Officer Derek Chauvin, knelt on his neck for almost eight minutes and 46 seconds.
Officer Chauvin has been charged with second-degree murder and three other officers have been charged with aiding and abetting the crime.
All four have been fired and the incident has touched off protests—and riots—across the country.
Chief Brown said he spent quite a bit of time going through the Facebook threats, most of which seemed to be directed against people from outside threatening to come in and disrupt the peaceful protests—not against the protestors themselves.
“They didn’t rise to the level of being illegal,” he said, “but they were disturbing none the less.
“Theresa and I have worked well together before and they have every right to protest.”
Saturday, he said, he was there on his day off because the message was so important.
Going into Saturday’s vigil, Ms. Heary said as hectic as the days leading up to it had been, the work she and others have done since 2017 through Rural Awakening put them in a good position to pull it all off.
“We have email lists, relationships with people like Chief Brown and Sheriff Stevens. We know there are a lot of good people who believe that these things are wrong.
“This will be a chance to mourn. Monday the real works starts.”