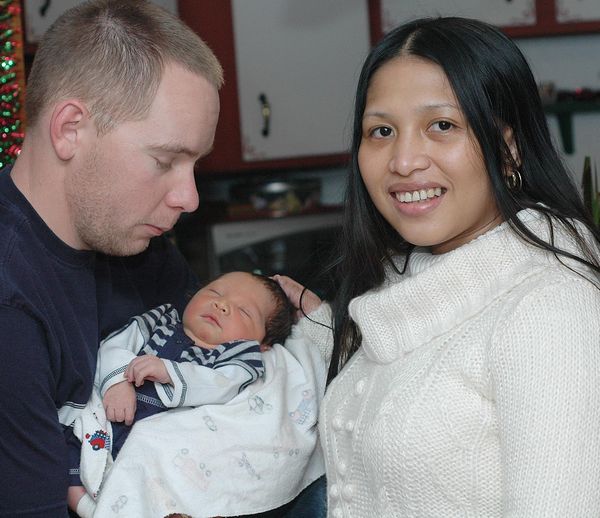 Sometimes, timing is everything.
Just a few days before Christmas, Ryan Coon of Worcester, a sergeant with Charlie Company of the 2nd 108th out of Gloversville, had his bags packed, ready to ship out to Afghanistan with the rest of his National Guard unit at Fort Bragg.
But instead, at 4:20pm Sunday, he touched down in Albany.
An then, a mere 24 hours later—exactly---and on Christmas Eve to boot, his wife, Lourdes, delivered 6-pound, 14-ounce Ryan Jon Coon Jr.
Thanks to the efforts of Bassett Hospital midwife Martha Harvey, Sergeant Coon will have a little time to get to know his namesake before rejoining his unit January 11. He expects to be in Afghanistan until at least September.
“Yes, it’s happening more,” Ms. Harvey said of her role in getting Sergeant Coon a leave. “It’s such a tough time for these young families. The Red Cross has to act as a go-between, so there were a lot of three-way calls…I was probably on the phone all day Thursday. I’m just so glad it worked out.”
Married in 2004, the couple met in the Phillipines, where she was working and he was stationed.
Eventually, they moved back to Worcester , where Mr. Coon’s parents, Tracey and Jon , live.
Ms. Coon’s parents live in her homeland of Korea, so for the past few months, she’s been living with her in-laws.
Sergeant Coon explained that, typically, leaves like his aren’t granted unless it’s an emergency. Births qualify, but since Lourdes wasn’t due till the second week of January, his was more difficult to get.
“There’s only so much they can do without proof,” he said, gazing down at his sleeping son. “Thank God the leave came through when it did or I would have been on the plane to Afghanistan. It’s a 20-hour trip, so there’s no way I would have made it home on time.”
Ms. Coon said she woke up sometime in the early hours of December 24, unable to sleep.
“I didn’t feel too good,” she said. “And then my water broke. And then the contractions started.”
It’s already a family joke that last Christmas, when people asked her what she wanted, Ms. Coon said, ‘A baby.’ Four months later she was pregnant and by Christmas 2007, she was holding their son in her arms.
Sergeant Coon has already seen action in Kosovo, but Afghanistan will be different, he admits and he promises to keep his head down.
“Always.”