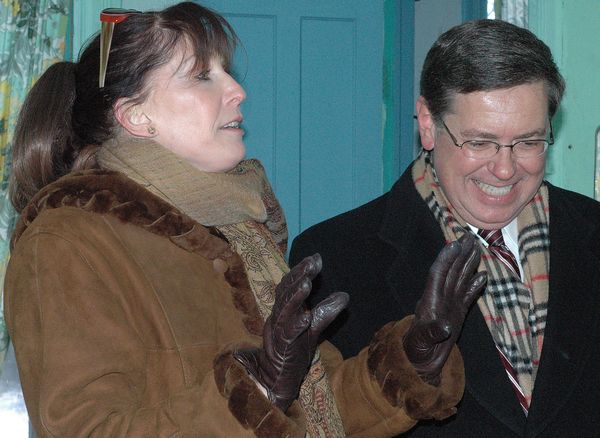 When Michelle Curran got the news Wednesday, she called Sharon Springs neighbor Doug Plummer, screaming.
The she asked to borrow a crowbar.
Ms. Curran, who with partner Michael Lauder, owns the only one of the four Pavilion Cottages still standing, has been awarded a $500,000 Restore NY grant to turn the Civil war-era building into five, three-bedroom condominiums.
“Even as a ruin, it still has grace and charm,” she said Monday during an impromptu tour of the site.
Mr. Plummer, who with his partner, Garth Roberts, restored and reopened the dilapidated American Hotel in 2000, agreed.
“Our building was in much, much worse shape,” he said. “But these buildings, as long as their bones are good and they’re structurally sound…this will be something wonderful.”
The Pavilion Hotel, which stood near what’s today the Sharon Pool, was built in 1836 and demolished a little more than 100 years later after falling into disrepair.
The nearby Pavilion Cottages were built about 30 years later as private suites for families who brought their own servants with them.
As recently as three years ago the sole remaining cottage, with about 9,000 square-feet of space, was used as summer housing for young workers at the historic Adler Hotel, another Sharon Springs landmark.
Ms. Curran, who owns the nearby Stone House, yet another landmark, said she “begged for years” to buy the Pavilion Cottage; she estimates it will take at least $1.5 million to renovate it.
The idea behind Restore NY, said State Senator Jim Seward Monday, is to help keep the kind of momentum already underway in Sharon Springs going.
“This is a place on its way back,” he said. “Money like this is an investment in the community.
“Hopefully, it will draw other investors and it will certainly help keep an important part of Sharon’s history alive.”
Assemblyman Pete Lopez agreed.
“What we’re really doing is investing in the people already here,” he said. “If we don’t have people like Michelle and others willing to take the risk, the money in meaningless. This is just priming the pump.”
Because of the amount of state paperwork required for condominiums, Ms. Curran said it will be at least a year before construction—or more accurately, deconstruction—begins on the cottage.
“This money will make it possible,” she said,” and it will be beautiful. We’re going to make them energy efficient, they’ll be going back on the tax rolls, and I think they’ll be a real asset to the community.”
Ms. Curran’s $500,000 Restore NY grant is part of $100 million awarded across the state in the second year of the three-year program, which is administered by the Empire State Development Corporation.
This is the second year she’d applied for the money.
Mr. Plummer, who’s also a village trustee, spoke to the fact that the grant program makes saving historic buildings like those in Sharon possible.
“It’s wonderful that the state sees the value in preservation,” he said. “Grants like this make it possible to save these buildings, and it couldn’t come at a better time.”
Maureen Lodes, who chairs the Joint Sharon Springs Task Force, a group created to look at everything from planning to parking after a group of New York City investors outlined plans to spend $33 million to redevelop the village’s spa industry last April, applauded Ms. Curran’s passion.
Ms. Lodes was one of the first to renovate a historic Main Street building and today runs her gift shop, Cobbler & Co, out of it.
“The success of Sharon Springs is based on the fact that we live here and we answer to the people,” she said.
As he walked though the cottage with Ms. Curran, the legislators and others, Mr. Plummer, who has just begun work renovating the old Masonic Hall across from his restaurant, joked that there was a time when he dreamed of fame and fortune.
“But today, give me a respirator and a shop vac, and I’m in heaven.”