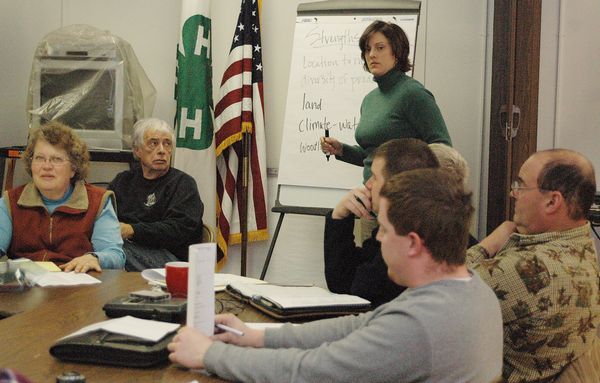 The Four Partners Agriculture Committee took another step forward Thursday when almost half of the farmers returning surveys sat down to prioritize their answers.
Part of efforts to develop a Schoharie County-wide plan for agriculture, the survey is just one arm of the Four Partners’ work to come up with a vision for: Farming, tourism, manufacturing, and micro-enterprise in time for an Economic Summit in March or April.
Linda Cross, the Ag Committee coordinator, said they mailed out about 400 surveys and got 50 responses—about a 14 percent return; about 25 farmers—large and small, dairy and other—and others with interest in agriculture turned out to move the work ahead.
Taxes, energy, labor, and market access led farmer concerns on the survey, and they were there in Thursday’s discussion, some of them, more than once as either a strength, weakness, opportunity or threat.
The county’s most obvious agricultural strengths, the group agreed, are: Location to markets, diversity of farming, and natural resources, including land, climate and the availability of water.
Weaknesses included taxes, development pressure and the cost of land, and too many governmental regulations.
The most opportunity seems to be in an increased interest in buying local products and the access to markets; threats were: Development pressure, and the government.
Interestingly, said Earl VanWormer, chairman of the Board of Supervisors and a member of the Four Partners, almost all of the issues raised by agriculture have also been raised by the Manufacturing Committee.
Jim Hayes, who with his wife, Adele, and family, raise and sell pasture-raised chicken on their Sap Bush Hollow Farm, said he sees a tremendous potential in the growing demand for local products and others agreed.
“We can’t pray for God in Washington or Albany [for help],” he said. “Let’s do it here.”
John VanDerwerken, wh o raises beef, said he wants to see agriculture maintained for his children and grandchildren; Art Graulich, a Carlisle dairyman, said he’s not planning on changing jobs.
The group also talked about the need to get young people involved in farming and agreed the interest is there; the financing is not.
“We need to get creative about our farming,” said Julie Pacatte Rohan, Empire Zone coordinator, and a member of the Four Partners Agriculture Committee.
Ms. Rohan said she lives on an old farm with unused land and buildings; there should be some way to connect those assets with someone who wants them, she said.
The Agriculture Committee will continue to meet, maybe even weekly, to develop its plan. The group meets again this Thursday, the 24th, 7pm at the Cooperative Extension in Cobleskill.
RSVP by calling Ms. Rohan at 234-3751 or by emailing her at juliepacatte@yahoo.com.