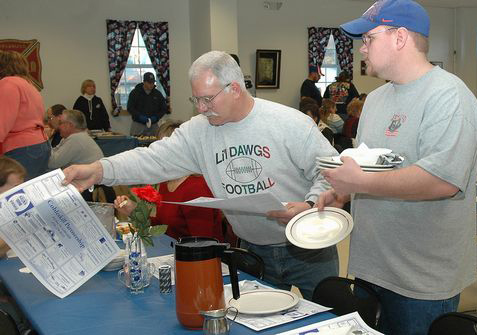 Bud Gunzinger’s served the Cobleskill community for years. The community did its best to return the favor Sunday afternoon.
A huge turnout enjoyed a benefit spaghetti dinner and silent auction that together likely raised more than $10,000 for Mr. Gunzinger, who is a cancer patient.
The benefit was at the Cobleskill Firehouse and was hosted by the Cobleskill-Richmondville Li’l Dawgs Junior Football League.
Mr. Gunzinger helped form Li’l Dawgs, the tackle football program for C-R elementary students, nearly 12 years ago. But he organized and ran the Cobleskill Boxing Club, directed the Little League program and has been involved in numerous other youth programs over the past 25 years.
Dottie Smith, one of the organizers, said the one-day benefit will probably total more than $10,000 when all the money is counted.
“Bud touched a lot of lives, and it showed on Sunday,” Ms. Smith said.
Li’l Dawg coaches cooked and served the meal, with all the food donated by businesses and individuals. Merchants and families donated dozens of items for the auction.
All concerned noted Mr. Gunzinger’s long association with kids’ programs and appreciated his hard work.
“Lots of parents help coach teams when their kids are involved, and that’s great,” one friend who asked to be anonymous, said at Sunday’s benefit.
“Bud’s been active long after his kids graduated from high school. That’s the way he is. Football, baseball, basketball, boxing, whatever. Bud’s always involved.”
Andy Lawyer, involved with Li’l Dawgs and a cook at the benefit, pointed to Bud’s special talents.
“He’s always been there for kids,” he said. “When Bud would ref a game, sometimes he’d stop it to tell kids what to do or what they were doing wrong.”
In Li’l Dawgs and Little League, Mr. Gunzinger also made sure coaches toed the line and taught kids instead of yelling at them, according to several at the benefit.
“He’s a mentor, not only to kids but to coaches,” said Larry Markley, another Li’l Dawgs organizer. “He’s been good to us all through the years. Just a hell of a guy.”
Others said Mr. Gunzinger is simply fun to be with, whether he’s coaching, reffing or on the sidelines at a Bulldog football game.
“It’s fun when he’s on the field,” said Joe Campbell, another cook at the benefit. “He’s a good person. . .that’s one reason we’re doing this.”
“Bud’s a dedicated person,” added Pat Pacatte. “He’s got a great sense of humor, and he’s really sincere about what he does.”
Those who may want to donate can write a check to the Gunzinger Family Benefit Account and send it c/o NBT Bank, 691 East Main Street, Cobleskill.