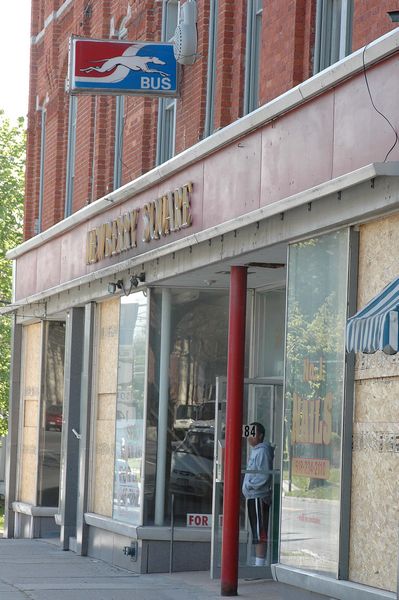 The case of the broken Newberry’s windows is going to trial in Cobleskill, hinging on the question of whether plywood is a suitable replacement for glass.
The trial will be 10am May 28 in village court, and it will be a bench trial, meaning instead of a jury, Village Justice Richard Hamm will make the decision.
A scheduled trial was the outcome of Newberry Square owner Harry Ioannou’s second appearance in court Monday to answer a citation about not replacing the three plate-glass windows that were broken March 1.
Mr. Ioannou covered the windows with plywood that day, but village Codes Enforcement Officer Mike Piccolo issued a citation for the windows remaining unrepaired.
Prominently facing Main Street, the three windows have been called an eyesore by some residents. Newberry’s is in the village’s historic district.
Mr. Ioannou, however, has said he has no insurance or money to replace the $3,000 windows.
Mr. Ioannou requested a lawyer at his first court appearance two weeks ago, and on Monday Ed Wildove, his attorney, pleaded not guilty for his client.
And, Mr. Wildove argued, the state Property Maintenance Handbook isn’t clear about whether a broken window must be replaced with glass.
“There are lots of places that have plywood without glass,” Mr. Wildove said.
Justice Hamm quoted the Property Maintenance Handbook, reading that windows must be “in good condition and weather-tight” and “free of cracks and holes” in addition to be being maintained properly.
“A sheet of plywood is not a window,” Mr. Piccolo said. “The building is occupied by people. They get light by windows.”
“Plywood, to me, is not proper maintenance,” Justice Hamm added.
When Mr. Wildove said the issue was a question of interpretation, Justice Hamm responded that leaving up plywood was “nothing but hobnobbing.”
Village Attorney Meredith Savitt, arguing for Mr. Piccolo, said that when hurricane victims put up plywood on their damaged homes, “they wouldn’t consider the plywood permanent.”
Mr. Wildove then requested a trial, and attorneys agreed on the May 28 date.
“I would like to have it settled then,” Justice Hamm said.
Afterwards, Mr. Ioannou said other buildings in Cobleskill have plywood over broken windows and owners haven’t been cited by Mr. Piccolo.
One example is the boarded-up home on the corner of Main and North streets, which burned in April.
But Mr. Piccolo said the owner of the burned home, John Mazzone, cleaned up the burned home the day after the fire and has engineers and carpenters on site to assess what can be done.
It’s entirely different than three broken windows, Mr. Piccolo said.
“It’s not the same at all,” he said. “There are structural issues, and he plans to rebuild. It’s not just three broken windows.”