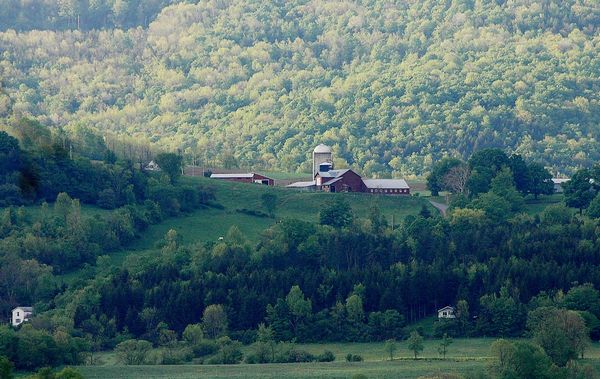 With more questions than answers, Schoharie County’s Four Partners are jumping feet first into something unheard of here:
Natural gas exploration.
Unheard of until about three weeks ago when representatives from Mid-Central Land Services out of Evansville, Indiana began knocking on local doors, hoping to lease land for natural gas exploration.
“I’m pretty much learning about this on my feet,” said Jodie Rutt, executive director of the Schoharie County Chamber of Commerce, one of the Four Partners.
So is everyone else.
That’s why the Four Partners have set an informational meeting for this Thursday, May 29, 7pm, in SUNY Cobleskill’s Bouck Hall Auditorium.
On hand are expected to be representatives from the New York State Farm Bureau, DEC, and Jeff Decker from Broome County, all of whom have expertise in dealing with what’s being called a gas rush.
The Four Partners—the Chamber, Farm Bureau government, and education--haven’t taken any stance and see the meeting as a first chance to ask—and hopefully, answer landowners’ questions.
Winnie Nelson, president of the Schoharie County Farm Bureau, is a little more familiar with the topic than most, in part because she grew up in Southern Erie County and her husband is from northern Pennsylvania, both longtime hotspots for natural gas development.
Natural gas is found in shale and with the introduction of what’s called horizontal drilling, interest in recovering deeper reserves is growing.
“The issue seems to be that there’s a lot of shale under parts of Schoharie County and this may be an attractive resource to develop,” Ms. Nelson said.
“I’ve heard landmen have been in the tax office and it seems to be their intent to contact large property owners and make them an offer.”
Farm Bureau isn’t taking a stand, Ms. Nelson said.
It’s too soon—and many owners could have a lot to gain from natural gas.
“Our concern is that if people sign, they get a fair price,” she said. “And this is all so new no one knows what that is.”
Also thinking on her feet is Alicia Terry, County Planning director.
From what she’s been able to put together, Ms. Terry said Mid-Central has been contacting owners of more than 100 acres, trying to sign them up for leases that would allow for exploration and if successful, natural gas wells.
“It’s something that’s been moving northward,” she said. “We’re talking about a very significant pocket of natural gas worth a lot of money.”
The meeting on the 29th will be an attempt to tell landowners what to expect, what others are getting, and how to protect their interests, Ms. Terry said.
“People don’t want to sign something the first day someone shows up,” she said.
Was Ms. Terry expecting this?
No.
“There is a push across New York State. It’s been happening in Pennsylvania, West Virginia…they’re been methodically moving from county to county,” she said. “But we really weren’t expecting this.”
It’s all so new, she added, that it’s unclear what —if any—protections or restrictions may already be in place in things like planning codes.

When it comes to letting someone on your land for natural gas exploration, it’s all in the lease.
That’s the take-home message Jeff Decker of Vestal Center in Broome County will bring to Cobleskill on the 29th when he talks about his experiences and the coalition of landowners it spawned.
Mr. Decker and what he said are hundreds of other landowners in mostly the Southern Tier have joined forces to “protect ourselves, protect our environment, and protect our future” while pre-senting the companies interested in leasing their land for natural gas exploration terms they can work with as well.
“We’ve heard from more companies than you can shake a stick at,” he said. “We’ve seen bad leases, good leases…That’s why we formed a coalition: To band together.”
Within the month, Mr. Decker said the coalition—which can be found online at Coalitionconnection.com—plans to have drafted a lease that landowners will be able to adapt to their individual cir-cumstances.
By inviting what some call the “landmen” in without the hassles, he said, they believe they can get a better price for allowing the exploration and future gas development.
Pennsylvania has a long history of natural gas exploration and development, and despite the fact that Vestal Center sits quite a bit closer to the state line, Mr. Decker said they, too, were caught off-guard in late 2007 when speculators interested in negotiating leases came calling.
“We want this to be a good thing,” he said. “What’s written in black and white on your contract is the only thing that can protect you. You have to remember: These companies can sell these leases to anyone.”
Leases are all over the board.
An offer made by Mid-Central Land Services to one Schoharie County landowner who asked that his name not be used is for $7 an acre a year for the first five years for exploration with the possibility of another five-year extension at $10 an acre a year.
Royalties based on 12.5 per-cent of gross gas sales from each successful well would increase that figure by as much as $25,770 a month for 100 acres or $309,240 a year, depending on the price of gas and other variables.
Right now, the landmen are only contacting landowners with 100 acres or more.
Harold Loder of Richmondville said his sons were ap-proached by a landman and he plans to be there on May 29th when the Four Partners hosts a 7pm meeting in SUNY Cobleskill’s Bouck Auditorium on the topic.
From the research he’s done, Mr. Loder said he’s interested in learning more—but he also wants to be sure no one’s taken advantage of.
“We’ve got to be very careful,” he said. “We don’t want to see anybody gipped.”
Despite rumors—that got back to him—that he and Warnerville farmer Don Phelan had both signed explo-ration leases, Mr. Loder said he doesn’t know of anyone who’s done so—yet.
A Mid-Central offer to a Mongtomery County landowner in 2001 included a $100 an acre sign-up bonus for a three-year lease and 18.75 percent in gross royalties.
That man, however, never signed and no wells there were ever developed.
Mr. Decker was in church Sunday when an elderly neighbor told him a landman had dropped off paperwork offering her $5,250 an acre and his mother-in-law received an offer for $2,500.
“It sounds fantastic, but you have to look at the terms,” he said.

Why all this sudden interest in natural gas exploration?
According to information from New York state Farm Bureau, DEC, Cornell Cooperative Exten-sion and others, new technology is making extracting natural gas—which is found in shale—from deep reserves much more afford-able.
Much of that technology was developed in Texas at the Barnett Shale formation; called horizontal drilling, it involves drilling down and then out—figures discussed locally are 9,000 feet vertically and about 2,600 feet horizontally--and then using water to “hydrofract” the shale.
Adding to the sudden interest is data published by two Penn State-SUNY Fredonia professors indicat-ing New York‘s natural gas re-sources, especially in what’s called Marcellus Shale, a formation ex-tending south from near Syracuse, is much larger than previously thought.
The price of other fuels is also a factor as the Millennium Pipeline being built from Corning to Ramapo, and locally, the proximity to the Tennessee Gas Pipeline.
In addition to Marcellus Shale, other known formations in New York State include the Trenton-Black River, and Utica Shale, some of which are found locally.
Marcellus Shale, however, seems to be the most valuable in terms of both size and volume, again due to the introduction of horizontal drilling.