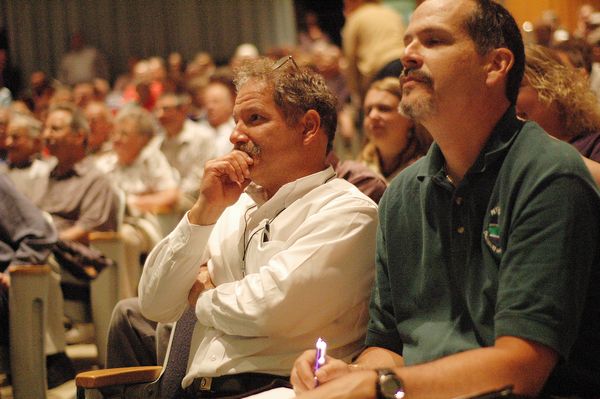 Peter Cozzolino and Marguerite MacFarland of Sharon Springs have had a couple of visits from a landman willing to spend the time educating them in the ins and outs of natural gas leases; neighbors Fred and Gloria Santillo have heard from no less than three different companies.
In Richmondville, Stanley Palmer Jr., too, has had his phone ringing off the hook with calls from companies like Indiana-based Mid Central Land & Exploration and Debbie Stanton of Cobleskill came home one day to find a lease packet an inch thick left on her front porch.
The five were just a fraction of a crowd of more than 300 who turned out Thursday for a Four Partners-sponsored meeting on natural gas exploration and leases.
And there they heard the same thing their attorneys and others have already been telling them:
Don’t sign anything—yet.
Beginning last month, companies like Mid-Central, whose Scott Lee was one of those taking questions in SUNY Cobleskill’s Bouck Hall gym, started contacting landowners with 100 acres of more, mostly in the seven northern Schoharie County towns of Sharon, Seward, Richmondville, Carlisle, Cobleskill, Esperance, and Schoharie, hoping to lease land for natural gas exploration.
“We believe the gas is there,” Mr. Lee said.
Historically, most of New York State’s natural gas activity has been in the western part of the state, Ted Loukides of DEC’s Oil & Gas Bureau told the crowd.
But new technology and research showing the shale deposits in the Southern Tier and now, Schoharie County, have ignited a firestorm of interest.
“It’s the oil and gas industry,” Mr. Loukides cautioned, “So you’re going to hear a lot of tall tales. You’re never going to have too much information.”
Jeff Williams of the New York State Farm Bureau has been dealing with natural gas –“an extremely complex issue”—since about 2000.
“This is the resource we own,” he said. “It’s up to us to protect it and use it to our best interest. If it ‘pops’ anything like it did in the Southern Tier, it could have a big economic impact. But it’s not going away. It’s only going to get bigger.”
In a quick run-through of things landowners need to keep in mind Mr. Williams pointed out:
* Once you’ve signed a lease, you’ve tied up all of your land.
* Leases need to make provisions for protecting prime cropland, damage to crop, and land disturbances.
* Make sure you get free gas.
* Attorney. Attorney. Attorney.
Mr. Lee said his company has already leased about 2,200 acres from six local landowners, but when Vince Stalis, a consulting geologist for the Coalition Connection, a group of 200 Southern Tier landowners who are banding together to negotiate better leases, asked for a show of hands from those who signed, not one went up.
Leases typically pay per-acre signup bonuses with 12.5 percent royalties on extracted gas, but lease rates are all over the board.
Mr. Stalis said leases in the Southern Tier were initially in the $3-$5 range; now some are up to $2,500 an acre.
Mid-Central typically offers $7 an acre for the first five years and $10 for the next five, netting the owner of a 100-acre lease a single upfront payment of $700 for the first five years, Mr. Lee said.
“The entire risk is on our company,” he said. “We want to make money and we want you to make money, too.”
Mr. Lee said the real money isn’t in the lease, but in the royalties, but called $7 an acre for Utica shale natural gas “very fair.”
Eventually, he said, his company hopes to make contact with 100-acre landowners in all of the county’s towns; representatives from other companies may already be looking at them, he said.
Jeff Decker of the Coalition Connection said his group can provide a range of services for other coalitions, from basic information to help negotiating leases directly with the companies, eliminating the landman.
“There is strength in numbers,” he said. “A large block of land is much more marketable to these companies. Much more powerful.”
The Coalition Connection works on a commission basis; the cost depends on how much work the local group can do itself. There is no upfront cost to join.
Farm Bureau Vice President David Huse said after the meeting that he expects the Four Partners to form a steering committee and then, a coalition that could contract with Mr. Decker’s group.


TALKING THE TALK…
If you weren’t confused by something called “compulsory integration” then you weren’t listening Thursday.
Because it confuses even the experts.
Compulsory integration is just one of the phrases those involved in leasing natural gas exploration rights on their land and maybe more importantly, their neighbors. will be hearing about as the issue develops.
It all begins with something called “spacing units’, 40-60 acres blocks of land “assigned” to a well, DEC’s Ted Loukides told Thursday’s crowd at SUNY Cobleskill’s Bouck Hall auditorium.
Once a company has leases from 60 percent of the landowners in a spacing unit, he said, compulsory integration, which deals with the rights and participation levels of surrounding landowners kicks in “so gas isn’t drained from beneath your property without economic benefit.”
The size of the spacing unit itself is determined by considerations like the depth of the well and the type of shale found there.
Compulsory integration is subject to a DEC hearing that kicks in once the 60 percent lease level is reached.
It doesn’t apply to the landowner with the lease, but to the others in the spacing unit.
Once the 60 percent level is reached, Mr. Loukides and Farm Bureau’s Jeff Williams explained, DEC holds a hearing.
“If you’re pulled into the red box [a designation on a map] you have three options,” said Mr. Williams:
• Integration as a royalty owner, the default option for those not making a selection.
These participants will receive royalties, typically 12.5 percent, based on the amount of land they own and how much—if any—natural gas the well provides.
They are not liable for any charges or fees associated with well operation.
• Integration as a non-participating owner.
This option gives landowners the same rights as the third option, participating owner, but there are no upfront costs; again, a dry hole costs nothing.
Royalties, however, aren’t paid until the well operator has recovered typically 300 percent of the participant’s share of costs.
This means the well must pay for itself three times before non-participating owners see a dime.
• Integration as a participating owner.
In this category, landowners can invest in the development of the well upfront and start receiving royalties immediately.
More information on compulsory integration and other natural gas leasing concerns is available on the DEC website, www.dec.ny.gov/energy/1532.html.
Also, on the Farm Bureau site, www.nyfb.org.
Mr. Loukides and co-worker Tom Knoll said DEC oversees well inspection, setbacks, permits, inspection, and reclamation—but not leases.
“It’s your baby,” Mr. Loukides said. “We have no control on that whatsoever.”
When a well is being drilled, he added, “It’s a big-time construction site, 24/7. But once it’s all set, you’re not looking at much.