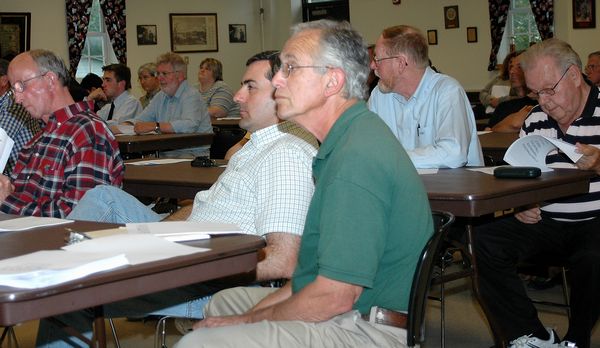 Even if Cobleskill decides it doesn’t want to become the City of Cobleskill, considering it might be the best way to leverage its strengths against a chunk of sales tax revenues worth as much as $2 million.
That’s the suggestion consultant Charles Zettek Jr. of the Center for Government Services had Thursday at Cobleskill’s long-awaited meeting on sharing services.
About 70 people turned out for the 2 ½ hour of “possibilities”; Mr. Zetteg said his next step will be to get together with a town-village one more time before putting out a final report by the end of June.
Mr. Zetteg spent the first half of the meeting running through expenses and revenues for both municipalities in things like administration, courts, planning and zoning, and water and sewer.
High taxes and the lack of revenue alternatives along with a lack of coordinated long-range development planning—especially when it comes to water and sewer—seemed to top the community’s list of concerns, he said, something he kept in mind when coming up with options.
Among them:
• Combining town and village offices.
• Consolidating both municipalities.
• Merging the village court into the town’s.
• Combining the planning and zoning boards.
• Eliminating the Police Department.
• Creating a regional water and sewer committee with joint representation from both municipalities and authority remaining with the village.
The elimination of the Police Department—projected as an $850,000 savings—drew considerable questions and outrage, even as Mr. Zetteg cautioned he was making any “value statement” with the suggestion, just pointing out a place where spending could be cut.
Without its own Police Department, the village would have to contract with the Sheriff’s Department for services with CPD staff folded into the county’s; Chief Mike O’Brien disputed the $850,000 in savings.
“That has not even been discussed,” he said. “It’s misleading. I don’t think it’s accurate.”
On less controversial ground, Mr. Zetteg called the village’s water services, running at a quarter of its two million capacity one of its biggest strengths.
“You have an asset here that could be better utilized for economic development,” he said, something the town and village have already begun working toward with an agreement to provide village water to the town for sale to a proposed Lowe’s.
Sidestepping the police issue, Mr. Zetteg said all the savings taken together would only total about $150,000.
Consolidating the town and village, however, could mean an additional $350,000 a year in state aid.
Even better, though, he said, would be the estimated $2 million a year the City of Cobleskill could get in sales tax revenues.
That money, however, would come from the county’s share and so those taxes would increase as a result, Mr. Zetteg said.
Unclear is what impact city status would have on Cobleskill-Richmondville Central School District taxes.
“Obviously, there are serious political issues associated with this,” Mr. Zetteg said, “but making a step toward city status would be a very clear leverage point.”
The City of Cobleskill would require dissolving the village into the town, a vote by residents, and State Legislature approval.