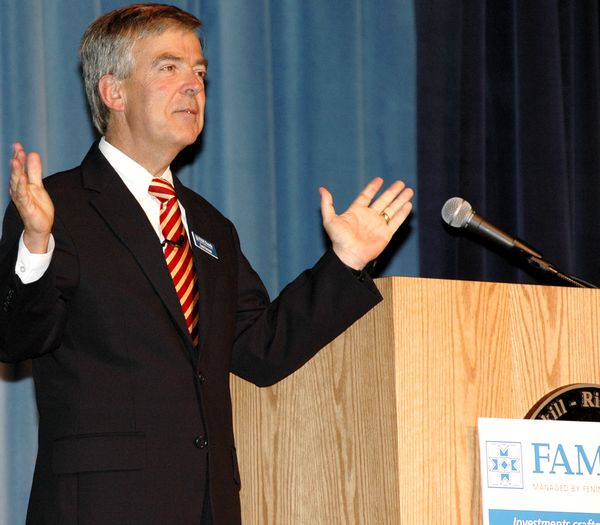 Nobody’s quite sure when, but the stock market will recover from its 2008 dive, Fenimore Asset Management Chairman Tom Putnam said Tuesday.
And although the immediate future looks uncertain, the longer view is good, he reassured hundreds of shareholders at FAM’s annual meeting.
As for the Cobleskill investment firm itself, FAM is poised to buy stock in solid companies at value prices, Mr. Putnam said.
Held at Cobleskill-Rich-mondville High School, the meeting drew what FAM officials believed was its largest audience ever, with most worried about the plunging market.
But Mr. Putnam moved to calm fears, comparing the current crisis with past crashes.
He read newspaper headlines that sounded as though they were written last week––“Panic grips the globe”––but said they were actually from the 1987 crash, the same year the FAM Value Fund started.
“I remember walking in then and seeing you glum,” Mr. Putnam said of the ’87 annual meeting. “You don’t look so glum today, and I congratulate you for that.”
Since 1957, there have been 11 periods of rising markets and 11 declining. The average length of a rising market is 42 months; the average length of a decline, 13 months, Mr. Putnam said.
How much longer will this decline last?
”A month, six months, we don’t know,” Mr. Putnam said. “But we’re reasonably sure we’re near the end of it.”
The current crash began with easy credit, followed by a glut on the housing market. When prices fell, people had less equity in their homes than the mortgages were worth.
The federal government’s rescue plan to buy securities from banks will provide liquidity––capital and the ability to lend––and help the market rebound, he said.
Once liquidity is freed, “then banks can lend money on a rational basis,” Mr. Putnam said. “But we still have to go through some pain.”
“People criticize the government, but the government is acting very responsibly.”
Not immune to the decline, the company’s two funds, the FAM Equity-Income Fund and the FAM Value Fund, have both shown double-digit losses this year.
“People ask me how I can sleep at night,” chuckled Paul Hogan, co-manager of the Equity-Income Fund. “I tell them I’m sleeping like a baby. I wake up crying twice a night.”
Kidding aside, he said the Equity-Income Fund has trimmed investments and built cash assets to buy stocks at good values.
John Fox, co-manager of the Value Fund, echoed that policy.
“We’ll buy companies with the best balance sheet, high quality and good cash flow,” he said.
FAM has traditionally heavily researched potential investments, looking for quality companies. That strategy won’t change, Mr. Putnam said.
“We invest in businesses that are economic engines,” he said. “They’ll continue to grow. If the market shuts down for 10 years, they’ll continue to grow.”
And current low prices offer opportunities.
“We know the values are the best we’ve seen in almost 20 years,” Mr. Putnam said.
FAM is likely to buy more stock in companies it already owns and is looking at commercial banks, health care and energy.
Noting that the energy market can be volatile, Mr. Putnam admitted that energy “can be scary, but you know the globe’s going to use a lot of it.”
He closed with a reassuring tone, urging the audience to think beyond the coming year.
“We think we own good companies,” Mr. Putnam said. “We need to look at the long horizon. We can’t tell about next year, but five to 10 years from now will be good for all of you.”