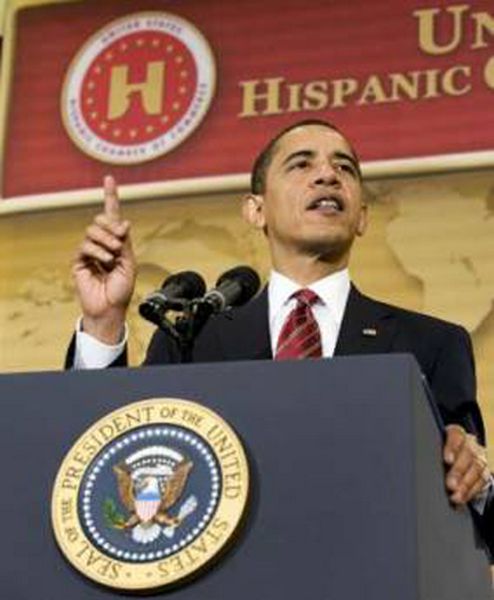 President Barack Obama’s message to students created a firestorm––on both sides of the aisle––at Cobleskill-Richmond-ville last week.
Objectors to the speech forced Superintendent Lynn Macan to ban the President’s live speech, and that decision brought a backlash of protest from White House supporters.
But after hearing from teachers and parents at C-R’s school board meeting Monday night, Ms. Macan said her decision probably would have been different had the President’s speech not been on opening day.
When the White House announced two weeks ago that the Presidents would address students last Tuesday, the first day of school, calls started coming into C-R offices.
About a dozen parents threatened to keep their kids home or pull them out of school if C-R broadcast the speech, Ms. Macan said.
At that point, over Labor Day weekend, she decided not to broadcast the speech for C-R students, though it would be available afterwards.
“We felt it was more important to have kids in school the first day,” Ms. Macan said.
“The first day is all about community-building and getting off on the right foot. You can’t re-create that for kids who aren’t there.”
Ms. Macan acted even though she knew the President’s speech was apolitical––stay in school, work hard, be responsible.
Secretaries who took the calls didn’t ask why the parent objected, but the general tenor was that “they didn’t think it was the President’s job” to address students,” Ms. Macan said.
“It was something like, ‘I don’t like you making my kid watch this,’” she said.
Her decision kindled protest from the other side. Ms. Macan said she received about 10 calls from adults who believed C-R should have shown the speech.
Those protests focused on freedom of speech, respect for the President, caving in to a small minority and the feeling that the speech was an inspirational pep talk, not a poltical message.
At Monday’s school board meeting, more teachers and parents turned out.
Teacher Jay Tanzman said the anti-speech calls were generated by “racial bias” or “political” disagreement” and that he was shocked C-R blocked the speech.
“How can such an act be explained?” Mr. Tanzman asked. “Who should people look to when the values of our educational systems are under attack?”
He stressed his comments weren’t an attack; instead, he wanted to point out a mistake and have the administration react differently next time.
Retired teacher Dan Larkin said Ms. Macan responded to “faceless people” who wouldn’t speak publicly.
“What other threats will you encounter?” Mr. Larkin asked. “Will you appease the faceless people on another issue?”
In the past, Mr. Larkin added, the school district always gave parents and their children an out. If parents didn’t want their kids participating in an event, teachers would give them something else to do.
C-R could have done the same with the President’s speech, he said.
Bob Stark, another retired teacher agreed that the school gave in to a tiny minority.
“To start school with a directive like that [banning the speech] is scary,” Mr. Stark said.
Parent Julie Pacatte Rohan, a Cobleskill alumnus, said the district was always open-minded and progressive.
“It didn’t occur to me that you’d censor the President out of the classroom,” she said. “I didn’t think that would happen here. He’s the leader of the free world.”
One speaker supported the ban. Parent and C-R staffer Joanne Salerno, countering the President’s message, said, “It’s my job to instill responsibility in my children. It was a good first day.”
Their family talked about the President’s speech, she added.
“It didn’t lose any effect not seeing it live,” Ms. Salerno said.
Responding to her critics, Ms. Macan said her decision was not to disrespect the President or take a political stance.
Not showing the speech “was the best chance to have students in class, and we made the speech available afterwards,” she said.
Previous presidents––George H.W. Bush and Ronald Reagan most recently––addressed students, but not on the first day, she said.
“We are sorry anyone was upset over this,” Ms. Macan added. “Clearly, there are many perspectives to be considered.
“In retrospect, would we consider other options?” Absolutely.”
Board President Dan Schulte said the issue and the reaction could be beneficial in the long run.
“Talk about a teaching moment, this is it,” Mr. Schulte said. “They can talk about the plusses and minuses of both sides.”
And, answering complaints about whatever the next call-in controversy might be, Ms. Macan said the Obama incident is not a precedent.
“This is not a policy,” she said. “This is not a precedent; this school district looks at each case on its merits.”