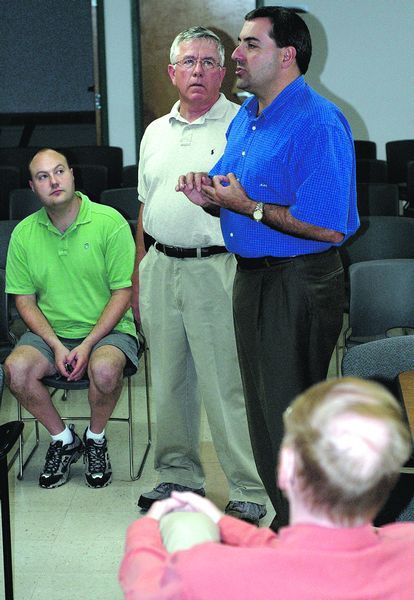 It looks like the Town of Cobleskill will be moving back to the village.
Before the end of the year.
After a walk-thru of the village offices on Mineral Springs Road Monday, Supervisor Roger Cohn and councilmen agreed they could probably make the shared space work.
Trustee Mark Galasso promised to get figures on square footage and utilities and other costs back to the town in time for a formal vote at their October 13 meeting.
If the village okays the deal at its meeting the following Tuesday—and Mr. Galasso already has the support of fellow Trustee Bob LaPietra—moving could start before Halloween.
“I think we can make it work,” said Councilman Linda Angell after the walk-thru.
“It’s a good idea if you’ve got the room. If we can save some money and get back in the village, we should do it,” added Councilman Ken Hotopp.
The town’s lease at Shad Point runs out at the end of December.
Past talks at sharing space with the village didn’t go anywhere because of concerns there wasn’t enough room for both municipalities.
Those concerns were there Monday, too, but by taking advantage of the unused mayor’s office, conference rooms, and a kitchen, officials think they’ve found a workable layout.
Tentatively, Town Clerk Tina Shuart and Deputy Clerk Tracy Cleveland will move into what’s now the village Codes Enforcement Office.
Codes Officers Mike Piccolo, for the village, and Pete Irwin, for the town, will move into the mayor’s office and there will be no office for either the next mayor or the supervisor.
Village Clerk Sheila Gillespie and Nelli Mooney, who splits her time between Codes and the village clerk, will remain in Ms. Gillespie’s office.
Alan Danforth, town assessor, will move into what’s now kitchen space on the first floor of the building.
Until officials realized the kitchen space—put in as the building’s first incarnation as a day care center—was available, there was talk about somehow using the court room.
But though that room can be used for meetings and conferences, by law, too much of it is off limits.
The village would like to sell part of the building to the town for $1 and then things like utilities would be split on a square-footage basis; if the town ended up using one-third of the building, it would pay one-third of those costs.
Mr. Hotopp, however, was one who argued he’d rather pay rent so he’d know exactly what the charges would be.
He also said he doesn’t want to get involved in managing a building.
Already, the town rents court space from the village; if it moves in, it would save about $4,000 a year on those costs.
The town is paying about $25,000 a year plus utilities at Shad Point.
Mayoral hopeful Mark Nadeau estimated the move would save the town $10,000-$15,000 a year, though all agreed money will need to be spent on things like office furniture, signs, and other expenses.
The town needs to move by year’s end, but Ms. Shuart pointed out that’s tax time, her busiest time of the year.
If both municipalities agree to the move, there’s no reason why the village can’t start moving its people around by the end of the month, Mr. Galasso said, and the town could have all of November and December to make its move.