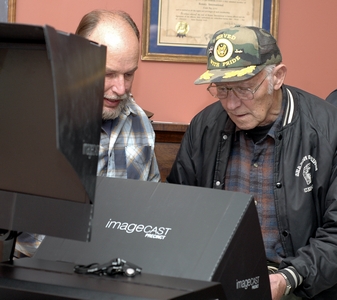 There was no test afterwards but plenty of good-natured election trivia beforehand Wednesday when Sharon Springs hosted Board of Elections officials for a forum on the new voting machine.
Called paper ballot-optical scanners, the machine will be replacing lever-style voting machines in November’s elections.
About 20 people turned out for a demonstration and a chance to practice vote, and while they waited for latecomers, Elections Deputy Commissioner Richard Shultes offered up election trivia:
• New York State was the first in the nation to use the lever machines (in Lockport) and the last to give them up.
• Elections were traditionally held the first Monday of November after the first Tuesday, not because that’s Election Day, a suggestion offered up by a smart-alec in the crowd, but rather that’s when the harvest was over.
It wasn’t the first Tuesday, Mr. Shultes said, because the shopkeepers who served as election inspectors were too busy doing their books.
And it was Election Day was Tuesday, not Monday, because it typically took three days to vote: One to get there, one to vote, and one to get back home.
Deputy Commissioner Sara Davies-Griffin explained the setup of the new machines, which are intended to give everyone an opportunity to vote.
For the blind, she said, there are headsets; those who can’t use their hands can use their feet to vote, and voting places will also have “sip and puff devices” for those who need them.
There are two sides of the voting machines; the left is set up for those needing special assistance and voting there could take as long as 40 minutes, Ms. Davies-Griffin said; the right side, however, can be used at the same time.
At an election, voters will sign in and be given a paper ballot.
They’ll use black “Sharpie” pens to mark ovals on the ballots, and though the ballots will look much like the old-style ballots, Mr. Shultes said write-ins will be on the ballot and any special propositions, on the back.
If the machines should breakdown, the paper ballots will be “emergency ballots,” but typically, voters will feed their ballots into the scanner—it doesn’t matter which side is up—and push a button on the machine’s screen to confirm and cast their vote.
The machine won’t tell voters if they “undervote”—that is, for example, they only vote for a single councilmen when there are three seats to be filled—but it will let them know if they cast too many votes and give them three tries at a re-do.
If they go ahead and cast a ballot with an over-vote, the votes for that office won’t be counted, but the rest of the ballot will be.
Ms. Davies-Griffin said Elections’ officials have made presentations to almost every town in Schoharie County and they’ve been pleased with the turnout.
Everyone who practice-voted got cast a vote for their favorite ice cream flavor, movie, actor/actress. Season, musical artist, TV show, and soap opera.
Results will be announced at the Fair.