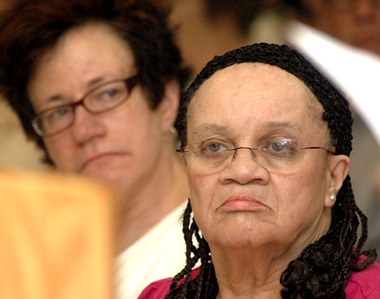 With signs that read, “You Lied to Us All,” “It’s Never Too Late to Educate the Ignorant,” “Shame on You,” and “Are You Leading By Example?” dozens of protestors lined up outside the Cobleskill Fire House Monday, to turn up the heat on Cobleskill’s top two leaders.
Supervisor Tom Murray and Mayor Mark Nadeau have been under increasing fire since Highway Superintendent Tom Fissell came forward with an audio tape of the two men using the “n-word.”
Monday’s protestors joined those calling for their resignation.
Outside, before the meeting, Jeff Lucier talked about his reaction when a friend forwarded him the tape.
“It’s just so deep…what that word represents,” Mr. Lucier said. “It says to me, ‘I don’t want you here.” Second-class citizen. Slavery. I could come up with a million words…”
Inside, Mr. Lucier, who is black, was one of a half-dozen people to take the mic as he talked about having to sit down with his 7- and 9-year-old daughters to explain the word they’d never heard from either him or his wife.
One of the girls burst into tears, “afraid all the black people were going to have to go away,” he said. “There’s been a lot of crying in our house…
The other was afraid he’d been arrested when he got home late one night.
“Can you live with yourselves for that? I ask you to resign.”
Rebecca Thillet said her family comes in all “shades” and her sons have been physically attacked, “and always, that most awful word, nigger.
“Sometimes, we all need to feel the full, awful impact of that word…When you use that word, you are expressing that racism.”
Vena Ray, a fifth-generation African-American, contrasted the emotions at Cobleskill’s Fourth of July parade with the language on the tape.
“Some words are archaic and represent part of our past…” she said.
“Asking you both to resign is a consequence that’s not too severe,” said John O’Donnell, a B&B owner who hid the last two issues of the Times-Journal from his guests out of shame.
More than 150 people, many with signs, sat through an hour of regular town business before a half-dozen of them were given a chance to speak; former justice Bob Mallia was the only one to question to validity of the tape.
“I’m not going to go the race issue. I support both these men,” he said, drawing applause from about a dozen in the crowd.
Pat Hults of ACCORD asked Mr. Murray to apologize before she walked out of the meeting.
Mr. Murray said he’d like to—he has his apology written—but on the advice of the law firm investigating Mr. Fissell’s charges, can’t yet.
Mayor Nadeau, however, did apologize for anything he may have done to “create a culture of racism”.
Mayor Nadeau was already campaigning on “Change,” when he said he was told the word might have racial connotations.
“So I asked my friend of many years [Mr. Fissell] if he had heard [that].
“Six months before I became mayor, he was taping me asking a question as if it was a statement…
“I apologize to anyone.”
Councilman Ryan McAllister called Mr. Fissell’s email allegation that racism is pervasive in Cobleskill “a very serious charge.”
“That’s not true!” responded Mr. Fissell. “Don’t put words in people’s mouths!”
“Why don’t you just resign?” called a voice from the crowd to Mr. Fissell this time. “You’re not doing your job!”
Specifically, Mr. Fissell’s email charges “that there is a culture of racism at the highest level of the elected leadership: the Mayor of Cobleskill and the Town Supervisor of Cobleskill.”
Councilmen, however, have been angered by the implication that they’re being painted with the same brush.
Mr. McAllister said it’s important that the town waits will the investigation is completed and he promised a full, public report.
“If I ever uttered it [the “n-word], I would resign,” he said, “but we have an obligation to deal with this in a very methodical, comprehensive way.
“They [attorneys] have a right to ask the questions they think are necessary.”