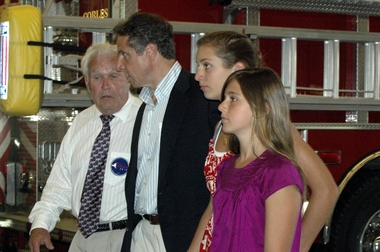 With references to New York State’s overdue budget, fiscal reform, ‘rightsizing government’ and discrimination, Gubernatorial candidate Andrew Cuomo pulled into Cobleskill Saturday behind the wheel of a RV to kick off his “Drive for a New NY,” campaign.
With his daughters, Mr. Cuomo, the Democratic candidate as well as state attorney general, plans to visit all 62 counties in the RV before November’s election.
More than 100 people were on hand for Saturday’s stop at the Cobleskill Fire House; among them, a group petitioning for Governor David Paterson to remove Supervisor Tom Murray and Mayor Mark Nadeau. (See related story on page 3.)
Richmondville Mayor Kevin Neary introduced Mr. Cuomo’s daughter, Mariah, who introduced her dad.
“Andrew Cuomo has always been about getting things done,” Mayor Neary said.
“Now, he’s the right person and it’s the right time to restore New York to its greatness.”
Mr. Cuomo called November’s race “probably the most important election in my lifetime.
“Either we’re going to figure this out, or if we can’t, with this level of dysfunction, this is going to be a different state,” he said.
New York State needs to get its fiscal house in order, Mr. Cuomo said, and pass a budget.
“You can’t spend what you don’t have,” he said. “Revenues for the state are down because incomes are down. It’s nothing different than what families have to do.”
Calling it “rightsizing,” Mr. Cuomo also called for smaller local and state government with more consolidated and shared services.
With a nod to the ongoing racial controversy in Cobleskill, Mr. Cuomo also said there’s no place for discrimination—anywhere.
It’s not just wrong, unethical or immoral, he said, “It’s illegal to discriminate.
“In New York State, there is no place for discrimination of one another,” he added to applause.
Mr. Cuomo told the crowd he believes New York’s best days are ahead, but it’s up to them to change things.
“The politicians will change when the people mandate they change,” he said.