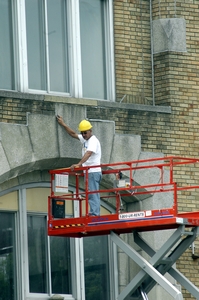 School’s out, but if anything, things are even busier than normal at Sharon Springs Central, where the district’s EXCEL project has kicked into high gear.
SSCS waited so long for the State Education Department to give its $3 million EXCEL project final approval, that there was some concern work wouldn’t begin this year.
That all changed in June when the project got the State Ed okay; construction started just days after the final bell of 2009-10.
“It all came together very quickly,” said Tony DiPace, SSCS business manager.
“It’s been a real whirlwind, but it’s nice to finally get it underway.”
Most of the work is addressing repairs and safety concerns and includes energy-saving upgrades to the lighting and HVAC systems.
Leaks in two roofs are being repaired and insulation over the ductwork in the auditorium—the source of a persistent leak there—is also being replaced, Mr. DiPace said.
Bathrooms on the second and third floors are being redone and will now be ADA-compliant and lockers on the second and third floors are also being replaced with new, full-sized lockers.
The ceiling in the old gym is being taken out and will be left open, Mr. DiPace said.
Asbestos tiles on all three floors will be removed, all the stairs are getting new treads, and the parapets in front of the building are being repaired.
Some of the most visible work will be outside on the playground.
The old wooden equipment has already been removed because of safety concerns and is being replaced with a state-of-the-art plastic playground with a climbing wall, slides, and new swings.
A section of the lawn near the playground has been paved with hopes of fundraising to eventually put a pavilion there, Mr. DiPace said.
Because most of the project is state-funded, the cost to taxpayers is minimal, Mr. DiPace said.