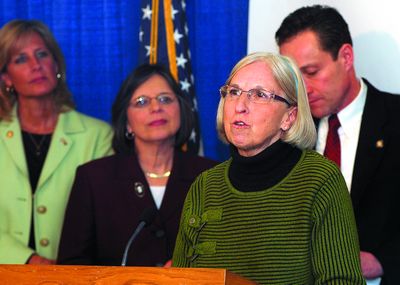 State legislators and local leaders gathered in Albany Thursday to whip up support for legislation that would offer tax relief to flood-damaged households and businesses.
Municipalities offering those tax breaks would also benefit, as the legislation would reimburse them with state funds.
But whether the Hurricane Irene and Tropical Strom Lee Assessment Relief Act actually becomes law is a question.
The act is similar to one enacted by the legislature in December. That bill allowed school districts and local governments till January 23 to offer reduced assessments to owners of flood-damaged properties.
Locally, only Schoharie County, the Village of Middleburgh and the towns of Schoharie, Wright, Blenheim and Broome opted in.
The proposed legislation would give municipalities a year to offer assessment relief, "enabling communities to have full discussion" on whether to opt in.
At Friday's press conference, leaders noted that many communities simply couldn't afford to offer reduced assessments. Doing so would place a huge tax burden on the rest of the property owners.
Offering the reduction would have cost Schoharie Central School between $500,000 and $800,000, according to Superintendent Brian Sherman.
"At the same time," he added, "we want to help our community. We want to help because our community is so resilient."
The new legislation would allow school districts such as Schoharie, and also towns and villages, to offer the reduction because the state would reimburse them.
"Those communities that are suffering the most could not afford to offer the rebate," said Assemblyman Pete Lopez, who hosted the press conference.
"While the intent of the original rebate proposal was good, they need the state's financial backing."
Assemblywoman Donna Lupardo is sponsoring the Assembly version of the bill. She pointed to the wide swaths of the state that were hit by the storms--Southern Tier, Schoharie Valley, Hudson Valley, Mohawk Valley--and stressed that they all need help.
This wouldn't be the first time the state reimbursed municipalities under similar circumstances, she added.
Her Southern Tier district was devastated by a 2006 flood, and the state offered the same aid to municipalities then.
"We have precedent for this," Assemblywoman Lopardo said. "The state made communities whole by reimbursing them. This is our best shot."
Several pointed out that the measure is essential to help communities recover. Sherrie Bartholomew, a Middleburgh resident and spokesperson for Dam Concerned Citizens, was one of those.
"This would serve as an incentive for people to stay here where their families have lived for generations instead of moving out," Ms. Bartholomew said.
Assemblymen and Senators from both sides of the aisle--and Upstate and Downstate--spoke in favor of the bill on Thursday. (See related story.)
That doesn't mean it's certain to become law, however.
Assemblyman Lopez said that fiscal conservatives who fear the bill's impact on the deficit probably won't favor it.
One plus is that Governor Andrew Cuomo will probably back it, Assemblyman Lopez said.
He expects the bill to move through committees fairly quickly, and he hopes it may come to a vote within two months.
"Democrats, Republicans, Upstate, Downstate. . .they all agree it's the right thing to do," Assemblyman Lopez said.
One compromise may be that the state wouldn't offer municipalities full reimbursement, he said. Albany could offer 50 cents on the dollar instead of dollar for dollar, he said.