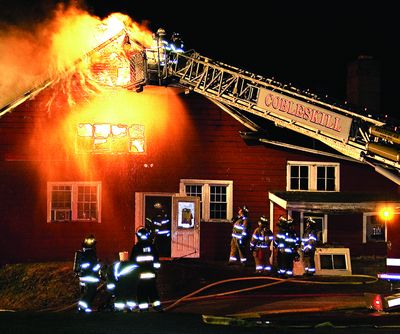 Fire heavily damaged a Summit landmark Monday night.
Flames gutted the interior of The Red Barn Restaurant and Tavern at the intersection of Route 10 and Charlotte Valley Road, but firefighters from seven departments managed to save much of the main structure.
Fire officials were unsure of the cause at press time. Schoharie County and state investigators were at the scene Tuesday morning.
The restaurant was closed as usual on Monday, but owners John Bulka and Carmen Campo were doing paper work there, Mr. Bulka said.
He left at about 3:30pm, and Mr. Campo left around 6:45.
At about 9pm, Jennifer Young, a Red Barn employee who lives nearby, stepped outside her home and saw the fire.
"Jen called 911, and then she saw a kitchen window blow out," Mr. Bulka said.
Josh Gaida, first assistant chief of the Summit Fire Department, said the kitchen in the rear of the building was in flames when firefighters arrived at 9:15.
"The wind was an issue," he added. "It was blowing one way, and then it turned around and blew the fire back into the building."
Volunteers had to deal with seven propane tanks at the restaurant. They shut four off and used a wrench to cut the lines.
"There were three inside," Mr. Gaida said. "We just kept our fingers crossed that we could keep them cool and then shut them off. We did."
Although they're not sure of the cause, both Mr. Gaida and Mr. Bulka believe the fire started in the kitchen.
"It looks like it," Mr. Bulka said, "but there was nothing on there except the pilot lights for the stove."
Besides Summit, departments from Richmondville, Cobleskill, Charlotteville, West Fulton, Jefferson and Stamford were at the blaze. They were at the scene until about 2am.
Mr. Gaida didn't believe the heavily-timbered building was a total loss.
"I think we had a pretty good stop," Mr. Gaida said.
Although he was unsure of future plans, Mr. Bulka agreed that furniture and other items inside would be salvageable.
"I had a fireman knock out a window so I could get the cash drawers out," Mr. Bulka said.
"The bar stools and shuffleboard table look okay. The fire didn't get into the liquor room. But there's nothing left in the kitchen."
He and Mr. Campo have owned The Red Barn, which Mr. Bulka believed was built in the 1870s, for nearly six years. The restaurant developed a regional reputation for Texas barbecue, ribs, brisket and steak.
It's been a difficult year, however. The Summit Shock facility, whose staff often ate at the restaurant, closed last summer, and this winter was poor for snowmobiling, usually a dependable draw.
"First Summit Shock closed, then we had a lousy winter, and now this," Mr. Bulka said.
But he remained upbeat. Earlier this year, the two owners agreed to run the restaurant at the Cobleskill Golf and Country Club this season. It will be called The Red Barn Clubhouse.
"We want to get that up and running as soon as possible," Mr. Bulka said.