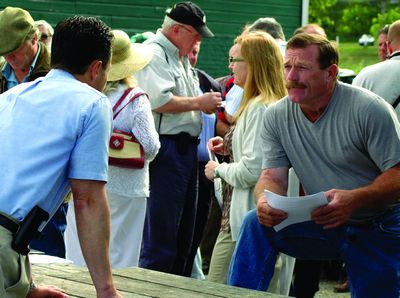 The Constitution Gas pipeline has no business in the Schoharie Valley.
That's according to vegetable grower Jim Barber of Barber's Farm, one of those who took the mic Tuesday at a press conference called by Assemblyman Pete Lopez to encourage Constitution to instead build the proposed pipeline along I-88.
"I'm very concerned," Mr. Barber said.
"If we give away our control, we're vulnerable to additional pipelines, power lines, or whatever else the energy company chooses to build there. Any short-term benefit is small compared with the risks."
Mr. Barber said called the trench necessary for the pipeline a "permanent scar" that would strip away topsoil and create a pathway for future flooding.
Assemblyman Lopez and State Senator Jim Seward also urged Constitution and the Federal Energy Regulatory Commission, which will have final say in approving and siting the pipeline, to make safety their top concern.
"This is under federal jurisdiction-not state," Senator Seward said, "but we do have a say. They need to work closely with the locals. They need to put safety first."
Constitution partners, Cabot Oil & Gas and Williams, an infrastructure company, are proposing a 121-mile natural gas pipeline from Pennsylvania through parts of Schoharie County.
According to spokesman Chris Stockton, they're studying several routes-including one along the I-88 corridor.
"There are some logistical problems with the route [along I-88], but the good thing is that it's early in the process," Mr. Stockton said by phone. "We can still be flexible. And we're looking at it again-very closely."
The problem with I-88, Mr. Stockton said, is that it runs close to populated areas and in many places, the space they'd need for construction equipment isn't there.
Additionally, because I-88 follows the Susquehanna River, there are concerns over the number of bridges and river crossings.
Ultimately, he said, it will be up to FERC.
"We won't just file one route, we'll file alternatives," he said.
Assemblyman Lopez said he spoke to FERC officials and they said it's possible to site the pipeline along I-88; he's already written to FERC and to Governor Andrew Cuomo asking that it be considered the preferred route.
"There are a lot of benefits to natural gas," he said. "But we need to make sure we balance that with local concerns and of course, safety."
Constitution is expected its application with FERC early next year.
Public information meetings on the projects kick off next Tuesday, July 17, in Milford, Pennsylvania.
A Wednesday, July 25th meeting at the Franklin Central School in Franklin, Delaware County, will be followed by one at the Best Western, Cobleskill, Thursday the 26th.
All meetings, which will be run as open houses, run from 6:30-8:30pm.