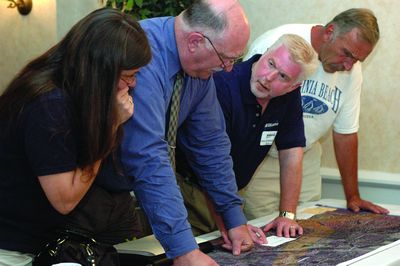 The curious, the angry, and the resigned packed Constitution Pipeline’s first local open house Thursday in Cobleskill.
With stacks of maps and other information, representatives from Constitution partner Williams lined the walls of the Best Western; FERC officials were also on hand.
There was no formal presentation—only a chance to ask questions one-on-one—something that angered Cindy Barber of Fultonham, who saw it as deliberate.
“I came here early so I get a front row seat near the microphones,” Ms. Barber said.
“But there is no front row. There are no microphones. They tell us our input is important, but as landowners, we’re not being allowed a united voice.”
Ms. Barber’s family has grown vegetables in the Schoharie Valley, one of the proposed routes for the 121-mile natural gas pipeline, for generations.
The still-lingering effects of Hurricane Irene there, she argued, should make it clear it’s no place for Constitution’s plans.
Randy Simms of Route 10, Summit, and Bruce Van Zile of Arabia Road, Jefferson, were two of those buttonholing a Williams representative with questions about who would be coming on their property.
“We’ve never been contacted,” Mr. Simms said. “If I can’t trust you in the beginning, how can I trust you halfway through?”
Mr. Van Zile had three questions: Who he goes to with complaints, how does he know when someone from Constitution is crossing his property, and “what are you going to pay me?”
The rep’s answer to the last question was “Nothing. We’re just asking permission. We’ll just put it down as a ‘no’ and go on.”
Kenneth Rau of Stonybrook owns property in Charlotteville that he’s long-intended to turn into a hunting preserve.
The proposed pipeline, he told Williams rep Jim Cretsinger, would go right up the center of it all.
“This has been years in the making,” he said. “It’s virgin mountain and you’re talking about clearing a path right through the middle of it. To say I’m angry is an understatement.”
Mr. Rau also he and his wife, Linda Ahearn-Rau, have never been contacted by Constitution; they learned about the proposal from a real estate agent.
Mr. Cretsinger pointed out that Constitution is looking at alternative routes.
“But it’s very difficult to negotiate with someone who can take you to court [for eminent domain],” Mr. Rau said.
FERC rep Charles Brown told a group gathered at his table that no route is a done deal.
“We’re going to make them look at the I-88 corridor very seriously,” he said.
Not everyone is opposed to the project.
Wright Supervisor Jim Goblet said he’s looking forward to having the Constitution compressor station built in his town as proposed.
In Richmondville, Harold Loder said engineers have been very easy to work with.
When his family expressed concern over the proposed pipeline because of the terrain near their Beard’s Hollow Road farm, he said engineers came up with alternatives.
“I have no problems with it,” Mr. Loder said. “I think they’ll compromise.”
And anyway, he’s been through this sort of thing before: 40 years ago he lost half his farm to the building of I-88.
“When the letter came in the mail, my wife said, ‘Oh no, not again, “ he said with a laugh. “I guess I’m just philosophical about it all.”