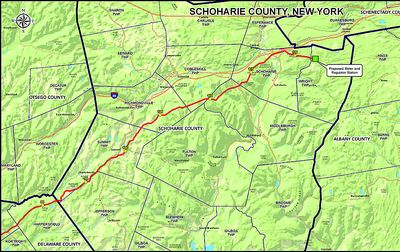 The latest route for the proposed Constitution Pipeline avoids going through the Schoharie Valley, calls for no additional compressor stations and has major changes in Richmondville, Cobleskill and Schoharie, pipeline officials announced Wednesday night.
Representatives from Constitution Pipeline told Schoharie County supervisors and about 65 residents that the current proposal calls for the natural gas pipeline to avoid the Village of Richmondville and the commercial zones in Cobleskill.
The new route also does not go through the Schoharie Valley, would be nearly a mile from the Cobleskill reservoir and have minimal impact on the Barton Hill watershed.
The proposal contains many changes to the proposed route, most after hearing from local officials and residents, said Cindy Ivey, the director of outreach for Constitution and Matthew Swift, the project director.
With the input from landowners and local representatives, "the route has changed over 50 percent," Ms. Ivey said.
She said the company has chosen to file the new primary route, with changes to FERC, which will have the final say on whether and where the line will be built.
The company, Ms Ivey said, is expected to file a draft report around February 20 of environmental documents and maps. The formal application will be submitted sometime between May 15 and June 15.
The 122-mile, 30-inch line is being proposed for Broome, Chenango, Delaware, and Schoharie counties. It would bring natural gas from northeastern Pennsylvania to an existing compressor station in Wright and then to customers in the Boston and New York City markets.
Though proposed by Constitution, nothing is finalized and all alternates "are in play," until there is FERC approval, Ms. Ivey said.
They distributed 10 maps to the 16 supervisors at the meeting but distributed none to the public.
Many of the changes in the proposed route are significant, Mr. Swift said.
The changes in the Town of Richmondville will follow the existing Tennessee Gas route while in Cobleskill the proposed route will now take the line about 5,000 feet from the reservoir instead of 500 feet, he said.
In Schoharie, the proposed route would run on Terrace Mountain and not go through the village, Mr. Swift said. There would be minimal impact to the Barton Hill watershed.
The line would go by the southern side of I-88 to cross Schoharie Creek.
The line will not be going up the Schoharie Valley, representatives said.
"We did not feel those Valley routes were viable," Ms. Ivey said.
A route along the I-88 corridor was also ruled out, they said.
The I-88 route was not selected because of steep slope issues, they said. Many of the areas were too tight to work in and some of the installation of the line could affect the highway.
The proposal calls for horizontal directional drilling under the creek. When installed, the line will be 50 feet below the streambed, they said, which will be too low for washouts.
Ms. Ivey said officials are trying to keep the pipeline at least 150 to 200 feet from buildings, though this is not the case in all locations.
The new proposal, they said, eliminates the need for a new compressor station in Wright.
Constitution is working with Iroquois Gas to expand their present compressor in Wright to handle the new gas.
"It's less impact," she said. "It's using what's already there."
Changes will also require only one metering station in the Town of Wright and not two, she said.
Since a new compressor station will not be needed in Wright, Ms. Ivey said the tax revenue generated by the project will be about $4.4 million. The original estimates were about $5.5 million.
Ms. Ivey said Constitution representatives are willing to come to any town meeting to discuss the project.
She said affected property owners should expect a letter from the company.
The letters will inform them of one of three options: their property is on the proposed route, their property is on an "alternate in play," or their property is no longer being pursued.
Representatives said the company hopes to begin construction in April 2014 with gas transmission to start in March 2015.