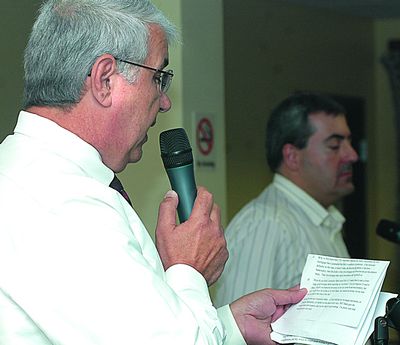 Despite an impassioned plea from Cobleskill leaders, Schoharie County supervisors Friday once again turned down a motion to take second position on a mortgage on the vacant Guilford Mills plant.
The vote was a little closer than last month, but in the end supervisors agreed not to be listed second on the mortgage for Butternuts Beer and Ale. The brewery has until October 15 to finalize the purchase of the factory.
Eric Stein, president of Cobleskill Partnership Inc., and Cobleskill Mayor Mark Galasso, urged supervisors to take second position on a mortgage, pointing to advantages such as job creation and avoidance of future maintenance on the vacant facility.
The original deal with Butternuts, would sell the county-owned facility for $2.5 million, with the county holding the mortgage and receiving no payments for three years.
To make improvements at Guilford, Butternuts officials have been seeking $1.3 million in financing from a bank, which wanted that loan in first position, meaning if the company failed, the bank would be paid back first.
"CPI recognizes there is risk to this project but with all risks there are potential rewards," Mr. Stein told supervisors Friday morning. "We believe the benefits and rewards of a successful Butternuts Beer and Ale business greatly out-weigh the disadvantages of risk."
The new brewery would add around 60 jobs to a county that has an unemployment rate averaging 10.1 percent for the first five months of the year, according to Mr. Stein.
The county, Mayor Galasso noted, would not be loaning funds to Butternuts or Long House Holdings, the firm setting up the financing for the project.
In the end, he added, the project will be providing revenue as well as jobs to the county.
County Treasurer Bill Cherry rebutted Mr. Galasso (see separate story).
It's important that the county maintain first position on the mortgage, Mr. Cherry told supervisors.
"If Butternuts wants to borrow additional money to repair or improve the building, they are perfectly welcome to do so, he said. "But when they go to a bank and borrow that additional money, it becomes a 'second mortgage' on the property.
"Why is this important? If the borrower defaults on the loan, or doesn't make the required payments, or declares bankruptcy, then the holder of that first mortgage can foreclose and get the property back."
In such a case, Mayor Galasso said, the building would still be repaired, and the county would receive tax revenue from the bank, the new owner.
Phil Skowfoe, the chairman of the county board, asked the mayor, whether as a businessman, "would you take a second mortgage?"
Mayor Galasso responded that he would, noting that "if you don't sell you have to fix" the building and it is not generating any revenue.
Some supervisors agreed with the Mayor and Mr. Stein and urged other supervisors to take the risk.
"We're so close," Bob Mann of Blenheim told supervisors. "I want the jobs. Everybody wants the jobs. Let's do it."
Anne Batz of Broome added, "We have the perfect opportunity to give the county a vision and a purpose."
Harold Vroman of Summit argued that having the brewery in the county would potentially aid many people including farmers, while ridding the county of a declining building.
"This is a chance for us to get out from under this building. The benefits far outweigh the risks."
Other supervisors, though, noted that the county is getting little income in the first few years while still owing $175,000 to the real estate agent handling the deal.
"The county has bent over backwards in relation to Butternuts to attain their goal," said Schoharie Supervisor Gene Milone.
Jim Buzon of Middleburgh told supervisors he has not gotten a call from residents supporting a second mortgage while many have been against the deal.
The company, he added, should put up its own assets.
Voting in favor of the county taking the second position on the mortgage were: Ms. Batz, Mr. Mann, Tom Murray of Cobleskill, Mr. Singletary, Earl VanWormer of Esperance, and Mr. Vroman.
Voting against the county taking the second place were: Carl Barbic of Seward, Mike Brandow of Conesville, Mr. Buzon, Richard Lape of Richmondville, Sandra Manko of Sharon, Mr. Milone, Mr. Skowfoe, and Tony VanGlad of Gilboa.
Last month, Mr. VanWormer voted against the county accepting the second position on the mortgage.