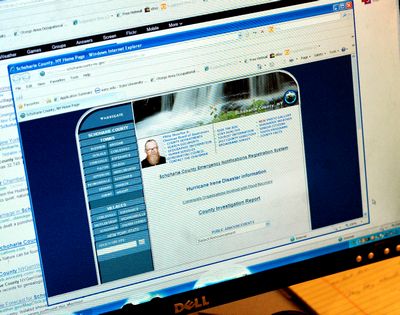 After a four-hour closed door session with attorneys Thursday, Schoharie County supervisors released only one part of the long-awaited and controversial investigation into alleged discrimination and harassment in the workforce.
The 104-page document describes several incidents of county department heads and officials cursing at and berating employees, but stops short of advising supervisors what to do.
Those recommendations are the second part of the report that was reviewed by supervisors, but not released.
That half of the report will be sent to the state Civil Service Office, the state Attorney General's Office, and possibly the District Attorney's office for review and suggestions.
Monday, supervisors had not yet gotten a written copy of the second part of the report.
"We're not dropping the ball," Chairman Phil Skowfoe said. "We're following through with the recommendations."
Thursday, only Schoharie Supervisor Gene Milone voted against releasing the nearly $300,000 report, noting that both parts of the report should be released at the same time.
There are many accusations in the first part of the report, he said, some of which will be found to be erroneous after the second part is released.
(The report released Thursday blacks out the names of most employees; the Times-Journal has a copy with the names.)
Personnel Director Cassandra Ethington suffers the brunt of the criticism in the report, but in a statement released late Monday, she refutes many of the allegations that she bullied and targeted some employees.
"This report was done improperly and unprofessionally from the start," Ms. Ethington said in a written statement.
Ms. Ethington's husband. Deputy Todd Ethington, is running for sheriff.
In his interview with the attorneys, Sheriff Tony Desmond recounted a meeting he and his former secretary Siobhan Reddick had with Ms. Ethington.
In the fall of 2011, the Ms. Ethington handed a list detailing proposed layoffs to Ms. Reddick, but became irate while discussing the layoffs, Sheriff Desmond said.
Ms. Ethington grabbed the paper from Ms. Reddick's hand, ripped it up and said, "Screw you, the game's over, get the f*** out of my office," Sheriff Desmond said in the report.
Ms. Ethington denied the accounts when interviewed, though Ms. Reddick confirmed the incident.
In another instance from October 2011, Deputy Chris Sniffen said he met Ms. Ethington at a restaurant in Middleburgh.
After exchanging pleasantries, Ms. Ethington warned Deputy Sniffen, "Chris, you better watch your f****** job."
Deputy Sniffen informed the lawyers that he asked Ms. Ethington what she meant, and was told, "You're about to be laid off."
Pat Shiland, the county's former Safety Officer was laid off in 2011 and detailed an encounter he had with Ms. Ethington when the Health Department was relocated earlier that year.
Mr. Shiland closed down the building after a black substance that could have been asbestos was found on a carpet.
He determined that the substance was not asbestos, but Ms. Ethington yelled at him.
She "pitched a fit," he claimed, "yelling, 'Who do you think you are? I'm a department head, you're nobody.'" He was then thrown out of her office.
In her written statement, however, Ms. Ethington, said she never "acted inappropriately with county employees in connection with the layoffs or in other situations.
"I have never harassed or bullied a county employee."