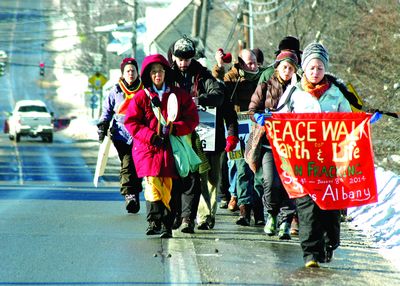 With banners, flags, and a small drum to keep the pace, a dozen anti-fracking activists from Sharon Springs and surrounding communities helped a 65-year-old Buddist nun kick off a 50-mile protest walk to Albany Saturday.
Jun-san Yusada plans to be in Albany in time for Governor Cuomo's State of the State address today, Wednesday, and she'll be part of a rally urging both a statewide fracking ban and a greater emphasis on renewable energy at the Concourse beginning at 11:30am.
Saturday, Ms. Yusada and supporters walked five miles from a press conference at the Sharon Municipal Building to the Sharon Tavern before she returned to Cherry Valley to spend the night.
Sunday, they picked up where they'd left off to travel nearly to Esperance; Monday's plans included walking through Cobleskill, one of the few local communities that hasn't enacted a fracking ban or moratorium.
Ms. Yusada's assistant, George Cho, said she typically walks 12 miles a day and will be staying in local homes on her way to Albany.
Twice as many supporters as walkers gathered before the start of the walk to share their fracking concerns with Ms. Yusada.
"Thank you for choosing Sharon Springs to start your walk," Mayor Doug Plummer said. "It's a vitally important issue and we're honored to be hosting you."
Whether or not hydrofracking for natural gas extraction is eventually permitted in New York State, Mayor Plummer said both the Village of Sharon Springs and the Town of Sharon have been aggressive in passing laws and tightening their land use codes against it.
Though fracking in Sharon may now seem unlikely, it was just 2 1/2 years ago, said Mike Shuster, who with his wife, Lisa Zaccaglini helped create the group Sharon Springs Against Hydrofracking, that 75 percent of the land leased in Schoharie County for natural gas development was in Sharon.
More recently, Sharon Springs Against Hydrofracking has been to increase the awareness and availability of solar energy.
"Our mayor and our supervisor were among the first to take up the cause and for this we're grateful," Mr. Shuster said. "It remains of vital importance."
Ms. Yusada has walked cross-country several times in the name of peace and was part of the "Longest Walk," from San Francisco to Washington, DC in 1978.