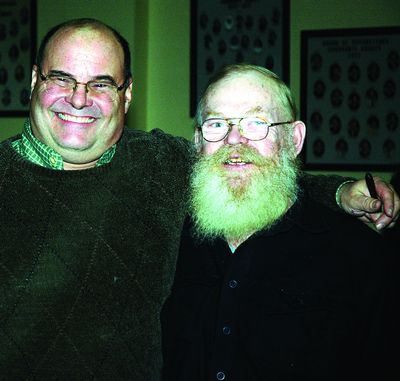 After a turbulent year, 2014 got off to a much smoother start for the Schoharie County Board of Supervisors at their annual re-organizational meeting Friday evening.
Supervisors elected Republican Tony VanGlad of Gilboa as board chairman in a close vote over incumbent chairman Phil Skowfoe of Fulton. Mr. Skowfoe, a Democrat, was then elected as vice chairman.
Mr. Skowfoe served as chairman for 2013. The year was marked by several disagreements between supervisors on issues such as seating, the sale of the Interknitting building, and the release of the controversial report on harassment and discrimination in the workplace.
Mr. VanGlad received the support of nine supervisors, all Republicans. Seven supervisors, all six Democrats on the board and one Republican, new Broome Supervisor Bill Smith, voted for Mr. Skowfoe. Under the county's weighted voting system, Mr. VanGlad received 1,693 weighted votes to 1,281 for Mr. Skowfoe.
With the results of the November elections, Republicans won back control of the county board from the Democrats. Republicans now outnumber Democrats on the board by a 10-6 count.
Mr. Skowfoe was elected as vice chairman of the board in a near unanimous vote. Only Harold Vroman of Summit did not vote for Mr. Skowfoe, choosing Richard Lape of Richmondville, a Republican.
After thanking everyone for their support, Mr. VanGlad said he looked forward to a year in which everyone works together.
"We'll have a bipartisan year with a lot of new things going on," he added.
"I'd like to see everyone working, talking together. That's the most important thing."
He urged any supervisor with questions to speak to the chairman of the various board committees.
"Let's make 2014 a fun and prosperous year."
Mr. Skowfoe also thanked supervisors for their support last year.
"I wasn't able to do it without the full support of the board and I'm sure you'll have it this year," he said to Mr. VanGlad.