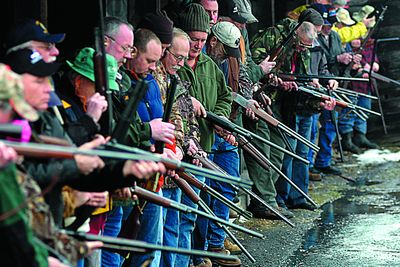 Schoharie County gun owners made their feelings about the NY SAFE Act loud and clear--especially loud--at the Middleburgh Rod and Gun Club Saturday.
About 60 sportsmen took part in a single-shot protest of the act, firing into the hillside behind the club as part of a statewide effort to get the act repealed.
"It isn't just a privilege, it's our right to protest," said Liz Reinhart, incoming president of the Schoharie County Conservation Association.
"We had an excellent showing, good representation for such a small county in New York."
The protest was by invitation only and drew participants from Conesville to Sharon. Members of the Conservation Association, other gun and hunting clubs, veterans and several supervisors from the Schoharie County Board of Supervisors took part.
Gun owners began gathering at 10:30 for the noon shoot, joking and swapping stories in the club meeting rooms to escape the rain.
Safety was paramount. Ed LaBadia, a range officer for the Middleburgh Rod and Gun Club reviewed strict rules for the shooting before the sportsmen, led by an American Legion color guard, headed to the range.
They lined up under the eaves of a lean-to, loaded their rifles, shotguns and handguns, and fired on Mr. LaBadia's signal.
Then they filed back into the club's meeting rooms to hear more about the SAFE Act.
Saturday's protest followed one last March that drew hundreds of sportsmen to Schoharie to blast the act, which many feel unfairly treats law-abiding gun owners.
Carlisle Supervisor Larry Bradt, who organized the March protest, said he believed Saturday's event was a good showing.
"I think we had a very good turnout," Mr. Bradt said. "People are dedicated to this because they want the SAFE Act repealed. I think we made our point."
Senator Jim Seward, who voted against the act a year ago and was at Saturday's protest, agreed with Mr. Bradt and added that there's been some progress in limiting the SAFE Act.
That progress includes a lifting of the seven-round magazine limit for police officers, and a federal court in the state's western district removed the seven-round magazine limit for sportsmen, Senator Seward said.
It's unclear whether the court decision applies to only the western district or statewide, meaning that fighting the SAFE Act is often a moving target, Senator Seward said.
There have been other successes. The legislature did manage to limit funding for the act this year, and the background check for purchasing ammunition won't go into effect until at least 2015, he said.
Protests like Saturday's play a major role in keeping attention on the act, Senator Seward added.
"It keeps the pressure on," he said. "Law-abiding gun owners won't go away. They're standing up for their rights."
And that's especially important this year, the Senator added.
"This will help because all state offices are up for election," he said. "Ultimately, the SAFE Act could be decided at the ballot box."