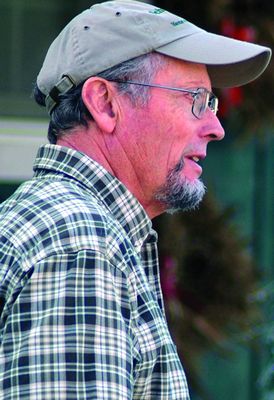 Schoharie County agriculture now has an extra-special friend in Albany.
Richard Ball, owner and operator of Schoharie Valley Farms for the past 20 years, lifelong farmer, community leader, and 2002 Times-Journal Star, has been named commissioner of New York State Agriculture and Markets.
Mr. Ball takes over from Darrel Aubertine, who left the position in October after two years.
Governor Cuomo announced Mr. Ball's appointment as farmer-in-chief at about 4pm Thursday; three hours later he was giving the State of the State address for Agriculture at the New York Agricultural Society's annual meeting.
"It was a pretty special thing, to have it all begin there," Mr. Ball said Friday.
Mr. Ball was first approached by the Governor's office regarding the post late last year and after a one-on-one meeting with Governor Cuomo, said he was especially impressed by the Governor's interest in the Schoharie Valley.
"The first question he asked me-and the very last one-was about how the Valley was doing after the flood," Mr. Ball said. "That carried a lot of weight with me personally."
He said he was also impressed by the Governor's interest in improving the upstate economy by linking it to agriculture and the downstate markets-a longtime passion of his own.
"I tried it on and walked around with it for a while," he said of the possibility. "Then I said yes."
Mr. Ball begins his new job this week and said his first order of business will be getting a feel for the department, which already looks to be in good shape.
From there, he plans to build on a number of issues Governor Cuomo talked about in his State of the State address, including agriculture and upstate-downstate summits and the Pride of New York promotion program.
Schoharie Valley Farms and the Carrot Barn will be in good hands with his children and wife, Shirley, he said, and he still plans to be involved.
"I'm a farmer," he said. "This kind of public service was never my goal, but I think it's a chance to tip the scale in the right direction for agriculture and I'm excited by the prospect."
Mr. Ball has held a number of local and state Farm Bureau positions, is vice president of the New York State Vegetable Growers Association, and has served as president of the Schoharie Valley Association, and the Schoharie County Chamber of Commerce, and is on the Schoharie Recovery board.
"Richard Ball is a lifelong farmer and advocate for sound farm policy who will bring fresh ideas and strong leadership to the Department of Agriculture and Markets," said Governor Cuomo.
"Agriculture is a vital sector of the state's economy, providing thousands of jobs, food for people around the globe, and a way of life for generations of New Yorkers. Richard embodies the proud tradition of farming here in New York State and will be a superb addition to this administration."