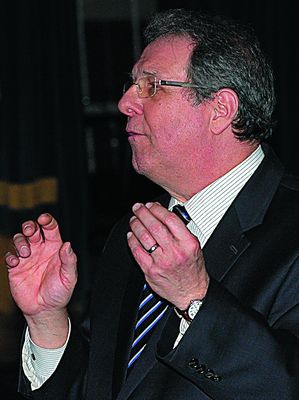 Schoharie County's poor school districts and others across New York are being short-changed by the state, according to Rick Timbs.
An expert in school finances, Dr. Timbs called for an end to the Gap Elimination Adjustment and a revision of state aid to schools at a presentation Thursday.
Those changes will happen only with an aroused public, Dr. Timbs said. But although his presentation was well-advertised in six school districts--Cobleskill-Richmondville, Schoharie, Middleburgh, Sharon Springs, Duanesburg and Berne-Knox--a crowd of only a little more than 50 showed up at C-R's Golding School.
Nonetheless, Dr. Timbs plowed ahead, arguing that the six districts are deep in the second half of schools in terms of wealth.
For example, att Sharon Springs, 52 percent of students qualify for free or reduced lunches, he said.
"It costs more money to educate a kid in poverty than it does in a wealthy district," Dr. Timbs said.
"People who need the most should be getting the most" in state aid.
Sharon Springs is hardly alone. A study by the state comptroller found 87 schools in fiscal peril, but Dr. Timbs added, "I think it's double or triple that."
A former school administrator, Dr. Timbs is executive director of the Statewide School Finance Consortium, and as such, he's studied state policies and school finances for years.
The most recent policy hurting poor schools is the Gap Elimination Adjustment, which takes money ticketed for school aid to close the state's budget gap.
In place for four years, the GEA has withheld $35 million from the six local districts, Dr. Timbs said.
While the GEA has closed the state budget gap, it's created a budget gap for schools. The six districts have cut staff and programs and dipped into savings to make ends meet.
"They've transferred the burden from them to us," Dr. Timbs said. "It's like being mugged."
And the GEA hits poorer schools harder than wealthy ones. Statewide, the average lost per student is $3,100. In poor districts, it's $6,400, he said.
Governor Andrew Cuomo's proposed budget would increase aid by 3.8 percent. That's not enough, Dr. Timbs said, because it only decreases what the state's withholding from schools.
"The Governor's proposal is almost exactly the same as last year," he said, "except it's less money."
He also attacked the tax-levy cap, which in recent years has limited school districts to raising the levy by two percent or less. This year, the cap will be 1.4 percent, meaning schools will have little chance to use taxes to close their budget gaps.
Again, poorer districts are hit harder, Dr. Timbs said. A one-percent cap means a small district could raise $20,000; in a rich one, $400,000.
He offered a multi-themed approach to improve finances:
•Get rid of the GEA.
•Don't fund new, non-essential programs like the proposed pre-Kindergarten classes. "If we can't pay for K-12, why have pre-K?" Dr. Timbs asked.
•Form an independent, non-political commission to revamp the aid formula. "They've been studying this, but after five years they haven't come up with a plan and we're running out of money," Dr. Timbs said.
He urged more public lobbying of legislators, and rather than rail at them, people should support them.
"Be constructive with legislators," he said. "They want to help. Give them strength."
And it's parents--not school officials-who should do the lobbying, Dr. Timbs added.
"It should be citizens, not superintendents and board members," he said. "Whose kids are these, anyway?"
Any lobbying, he emphasized, should begin immediately. To have an impact on the state budget, people should contact legislators by March 1. For school budget input, they should participate locally by April 1.
He also suggested parents involve booster clubs, civic groups and other organizations to help.
"You don't have much time," Dr. Timbs said. "Get people involved."

• • •
There will be a follow-up meeting to Dr. Timbs' presentation this Thursday, 6:30pm at South Colonie High School. It is open to the public.