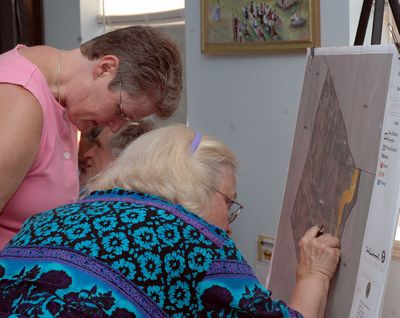 The Towns of Fulton and Blenheim are fast-tracking their future-shared and separate-after their first New York Rising meeting Thursday at the Blenheim Firehouse.
The two towns were latecomers to the NYR funding, first announced by Governor Andrew Cuomo at SUNY Cobleskill last September as a way to channel federal funding to communities devastated by Hurricane Irene, Tropical Storm Lee, and Superstorm Sandy.
Fulton and Blenheim were among the 22 communities added to the NYR list this spring in round two of the funding.
A Joint Steering Committee began meeting two weeks ago and plans to meet every other Thursday at the Blenheim Firehouse; the public is welcome at all meetings.
Thursday's meeting was intended to start gathering public input on the communities' priorities for rebuilding.
And though it will be a shared planning process, both are eligible for up to $3 million each in grants.
"It's all about rebuilding smartly and building back resiliency," Greg Brunelle of Tetra Tech, the planners hired to work with the two towns, told about two dozen people.
"But it's not a handout. We have to work for this money. At the same time, don't focus solely on the money. You're starting with a blank sheet of paper."
NYR projects developed in Schoharie, Middleburgh, and Esperance, which were in the first round of funding, included things like expanded cell coverage, a Schoharie Creek study, water and sewer lines, and a multi-purpose trail along the creek.
It's likely the Fulton and Blenheim list will include many of the same types of projects; NYR money is intended to focus on things like infrastructure, housing, economic development, health and social services, and natural resources.
It's also intended to develop projects that might be eligible for other sources of funding down the road, Mr. Brunelle said.
The process is intended to evolve from the bottom up and after an overview of NYR, the group divided up to ask questions and look at maps of their communities, using stickers to highlight areas of importance.
Ideas will be prioritized at bi-weekly Steering Committee meetings and at four larger public input meetings to be held between now and Christmas.
A draft plan needs to be finalized by Halloween, Mr. Brunelle said, with the final plan submitted to the state by mid-January.
Concerns that emerged Thursday included the difficulty of working with the New York Power Authority and the state Department of Environmental Conservation.
"The Governor has made it very clear bureaucracy is not to get in the way," Mr. Brunelle said in response.

While Fulton and Blenheim are just beginning the NYR process, the Schoharie Valley communities that began theirs late last fall are waiting to hear which of their projects will be funded.
Sarah Goodrich of Schoharie Area Longterm said it looks like the first round of grants will be going to municipalities for mitigation projects for things like drainage and creek work.
"As for the other projects, it's still a waiting game," she said.
The Schoharie Valley NYR group will be lending a hand where they can to help Fulton and Blenheim with their plans, she added.