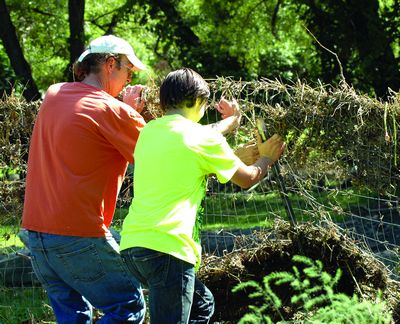 What was by some measurements as much of nine inches of rain Wednesday and Thursday left Sharon Springs Central School mopping up and a Staleyville farmer ripping out crops she can no longer sell.
The heavy rain also closed Routes 20 and 10-Route 10 because of a mudslide near the Dugway-flooded basements and businesses in the village and along Brimstone Creek, and damaged a handful of small bridges and roads.
"It just came down," said Supervisor Sandra Manko, "and it kept coming. It's a mess-especially along the creek.
"The good news is that no one was evacuated and we didn't need to declare a state of emergency. It was just a strange, isolated storm."
Staleyville is an old-time hamlet just off Route 10 north of the Village of Sharon Springs where tributaries joined Brimstone Creek to flood the road.
Randy VanArsdal said they had 18 inches of water running through their old dairy barn on Route 10 and cushions from neighbors' lawn furniture dumped in their front yard.
"And ours are probably downstream," she said with a laugh. "We used to get flooding in the spring with snowmelt, but not in August. It's crazy."
At Sunnycrest Orchards, 12-18 inches of water swept through the front greenhouse and store and carried away part of the parking lot.
Across Route 10 on Staleyville Road, Lora Newell saw a swath of floodwater three-feet deep overflow the streambed, stranding chickens and goats in their sheds and moving several of her raised vegetable beds at her Serenity Valley Farm.
"It was worse than Irene," Ms. Newell said, "and they called that a 500-year flood. This makes two 500-year-floods in three years."
Ms. Newell and her husband, Bento Benac plan to move their gardens and barns uphill. See their story on page 24.
At SSCS, four inches of water came in through vents at the north side of the building, flooding much of the first floor, including the new gym, which had just been refinished the day before.
School, however, will start on time, Thursday, September 4.
"We'll be ready to go," said Superintendent Pat Green, in no small part due to the efforts of the SSCS custodian staff, which was in the building, mopping up, as soon as the rain stopped.
"They really deserve our thanks," said Laura Jackson, school board president. "They've been in here every day working so hard."
Three classrooms in the middle of the school took on the most water, but the District Office, the cafeteria, and the conference room also got wet.
"It's the first time we've ever seen water in some of these places," said Glen Osterberg, head of maintenance, Saturday morning as he and co-worker Iris Reichenberger worked to move equipment out of the flooded rooms.
"I just don't know where all the water came from."
By Monday, most of the school's soggy carpeting had been dried out and fans were running full-speed in the impacted rooms.
Business Manager Tony DiPace said insurance estimates put the cost of the damage at $150,000, but he thinks it's less than that.
"If we can get the water out from under the new gym floor and stop that from buckling, I think it'll be substantially less than that," he said.
Repairs will include replacing soaked sheetrock and the carpeting, which will be replaced with tile.
The district will also talk to its architect about changing drainage at the school, Mr. Green said.
"These stroms just keep getting worse," he added.