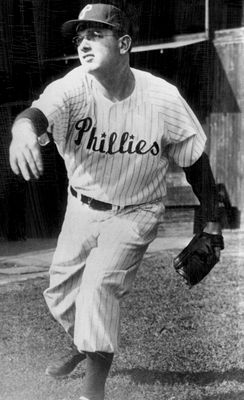 Only a few days remain to honor one of the area's most renown athletes.
Jim Konstanty, the late, great Philadelphia Phillies relief pitcher--and longtime Worcester resident--is a candidate for the Phillies' Wall of Fame at their Citizens Bank Park.
Helen Konstanty Rees, Mr. Konstanty's daughter, is drumming up local support for her dad.
Ms. Rees, who lives in Oneonta, is directing fans to the Philadelphia Phillies website, which lists 12 candidates for this year's election. Voters can pick three.
But there's not much time left; voting ends at 5pm Friday.
Her campaign has already had a strong response.
"It's unbelievable," Ms. Rees said. "The stories.. . . 'Your dad did this' or 'I remember your dad.' People have been wonderful.
"I don't know whether I'm more amazed at the power of social media and the printed word or how many lives he touched."
One of the early relief specialists, Mr. Konstanty pitched for the Cincinnati Reds, Boston Braves, Phillies, New York Yankees and St. Louis Cardinals.
Mr. Konstanty's best year was 1950, when he pitched the Phillies--nicknamed the Whiz Kids--past the contending Brooklyn Dodgers and into the World Series.
Mr. Konstanty was named the National League's most valuable player that year.
A ball boy for the Dodgers in 1950, Worcester attorney Marv Parshall remembers Mr. Konstanty and those contentious games with the Phillies. He also remembers the unusual circumstances of Mr. Konstanty's success.
"Konstanty used to work out in the school gym in the off season, and he was having trouble with his pitching motion," Mr. Parshall said.
"Andy Skinner, the local funeral director, was a real student of the game, and helped Konstanty out."
Mr. Skinner showed the pitcher how to throw a fork ball, and he helped Mr. Konstanty prepare for spring training, Mr. Parshall said.
Mr. Skinner's advice didn't stop there. Whenever Mr. Konstanty wanted help, he'd bring Mr. Skinner to Phildelphia.
"Listening to the game, I heard announcers on the radio mention it several times," Mr. Parshall recalled. " 'I see Andy Skinner's here in a box seat behind the dugout,' they'd say. Everybody knew it."
But it was Mr. Konstanty who actually did the work on the mound.
"He really does deserve the recognition because he hasn't had much," Ms. Rees said. "He developed the change-up and slider, and people don't give him credit for that."
Mr. Konstanty was a hero locally, and not just because of his years in the major leagues.
"Daddy spent years in the off season going to area schools, talking with the coaches and teams, working with students the coaches thought had potential," Ms. Rees said.
"He'd bring a supply of sneakers and shoes in the back of our station wagon for students who couldn't get into Albany or Oneonta. Cobleskill, Richfield Springs, Jefferson, Sharon Springs and all of the little schools were involved."
And in a small town, a big-time major leaguer stood out, Mr. Parshall said.
"He was personable, friendly. But he was also a professional who stayed to himself," Mr. Parshall said.
Born in Strykersville in western New York, Mr. Konstanty graduated from Arcade High School and went to Syracuse, where lettered in baseball, basketball, soccer and boxing.
"Jim Konstanty and Jim Brown, the football great, are the only two people to letter in four sports and graduate from Syracuse," Mr. Parshall said.
After his playing days, Mr. Konstanty opened a sporting goods store in Oneonta and was the athletic director at Hartwick College for four years.
Mr. Konstanty died in 1976 and is buried in Worcester.